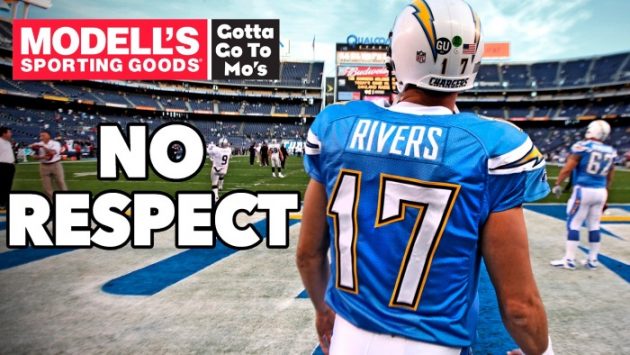 Modell’s Minute: Philip Rivers and a Lack of Fantasy Respect

There is no question that Fantasy Football strategies has gone through great changes over the past few seasons. Gone are the days when running backs rules the draft.

In today’s NFL throwing the ball is the name of the game. While that has boosted the values of top wide receivers in many eyes, the outrageous yardage totals seems to have devalued the quarterback to some extent.

With so many QBs putting up video game numbers, there’s just not much incentive to reach for the top few elite options. You don’t have to.

So if you’re going with the flow and decided to wait on the quarterback position in your Fantasy Football drafts, Adam Ronis has a suggestion for a QB you can likely draft in the mid-to-late rounds.

That name is Philip Rivers. At one point he was mentioned as an elite QB, but after really one down season, his reputation in Fantasy seems to have taken a hit. It’s your job to take advantage of that. Fill up on the top wide receivers and running backs. Maybe even grab a Rob Gronkowski or Greg Olsen. Philip Rivers will probably still be waiting after you’ve filled most of your Fantasy needs.

Modell’s Sporting Goods is all-in on Fantasy. This video is part of the Modell’s Minute series. They’ve also partnered with us on an incredible new promotion. Every day for the next year Modell’s is giving away two $50 gift cards you can use in a Modell’s or online. The best part is that The FNTSY Sports Network gets to give them out. Head on over to our contest entry page to see how you can get in on the Modell’s action.