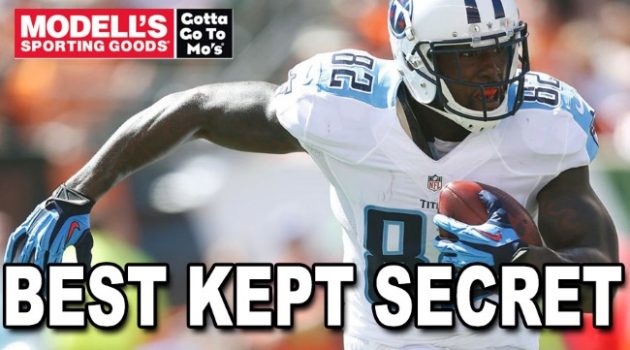 When it comes to Fantasy Football and tight ends most of the attention seems to go to Rob Gronkowski. He’s got the biggest personality, he plays for the Patriots, and to be fair to him, he deserves that top ranking.

That doesn’t mean however, that he’s necessarily the best choice for your Fantasy Football teams. You only get one first round pick and that may be what it takes to grab Gronk. Sometimes in Fantasy Football you have to make a choice between absolute production and relative value. That’s where Delanie Walker comes in.

He plays for Tennessee, which means he’s not on national TV all that much and the average fan is not as familiar with him as they should be. You need to take advantage of that and get to know a little more about Delanie Walker. First check out what Gregg Sussman had to say about Walker in the latest Modell’s Minute.

As you can see there is a lot to like about Delanie Walker. He hasn’t been the TD machine that Gronkowski has, but he did lead all NFL tight ends in receptions last year with 94. That’s a whopping 22 more receptions than Gronkowski in the same amount of games. In PPR formats that’s a pretty big deal. In fact according to Fantasy Football Today Walker average just 0.8 fewer fantasy points in their basic PPR scoring system.

In Marcus Mariota, the Titans have an up-and-coming young quarterback that will still probably rely on his tight end. The addition of DeMarco Murray will also draw plenty of attention in the end zone. Touchdowns are a bit of a crapshoot anyway, but it’s not hard to see Delanie Walker reaching paydirt close to 10 times.

Walker isn’t being ignored in early drafts, but he’s definitely looking like a value. FantasyPros consensus ADP has him as the 67th overall player drafted and No. 6 tight end, right after Travis Kelce and Tyler Eifert. A quick comparison shows you how wrong that is.

Drafting Delanie Walker is not the sexy pick. You know what is sexy though? Yeah, winning is sexy. If that’s your focus, then I think investing a fifth or sixth round pick in Walker is a no-brainer and an incredible value in Fantasy Football.