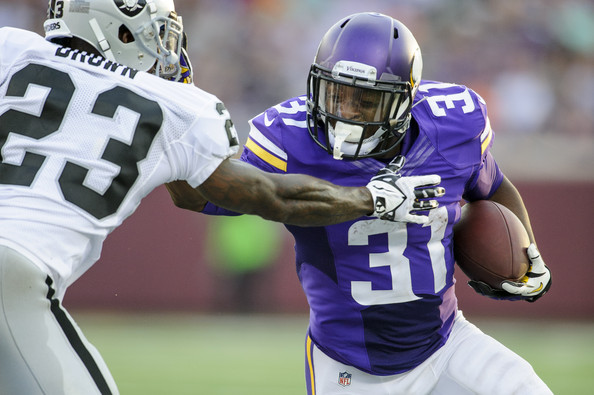 FNTSY Sports Network’s Pat Mayo and Tom McFeeley recap the Week 6 NFL injury report and debate Mayo’s Week 7 Waiver Wire FAAB Rankings. They address how to approach bidding for need versus depth and which defenses and QBs make the best streams in Week 7. Plus, Mayo breaks down the most important things to look at before spending your FAAB dollars, specifically, how have your league mates bid in the past while McFeeley offers up an interesting strategy of talking up bad players to your opposition so they bid on them.

It was nice of Denver give us access to its backfield flowchart: Lots of Ronnie Hillman, a splash of Juwanna Man Thompson and C.J. Anderson responding with out of office e-mails. Even in a tough matchup Hillman was able break 115 total yards. If he keeps this up, he’ll continue to be a factor after Montee Ball returns. And, until that happens, consider Hillman a Top 15 RB with the 49ers, Chargers, Patriots and Raiders the next four weeks… Soooooooo, Jerick McKinnon dominated Matt Asiata in touches against the Lions – 17 to 3. Will McKinnon continue with this split of the workload? Probably not. I mentioned in the Week 6 preview, that McKinnon’s usage could be a product of Detroit being susceptible to pass catching running backs. And it happened, ‘magine that! Don’t worry, hindsight is 50/50. In deeper leagues, I’ll be claiming Asiata for nothing after he’s dropped en masse, just in case the split reverts back next week. But, of the two, it’s McKinnon you want to own – for upside purposes alone. ANNDDDDD, there’s the added bonus of your leaguemates being all like, “he went to Jerick”… Terrance West was a healthy scratch for the Browns – meaning – Isaiah Crowell is just one Ben Tate twisted ankle away from SHAKING HIS DREADS all over your lineup. Crowell’s been my top stash RB since the beginning of the season and he’s shown enough flashes to retain that honor every week. His time is coming… Branden Oliver will hold value once Ryan Matthews and Donald Brown eventually get back in uniform, but until then, his opportunity bestows him the honor of every week starter… Justin Forsett should really be owned in every league. Seriously, what the deal? He’s posted 10+ PPR points in every game this season. And don’t worry about Bernard Pierce seeing more carries (15 to 14), those dreadful touches came with the Ravens up a zillion. Lorenzo Taliaferro remains nothing more than an upside stash in 14+ team leagues…. If Stevan Ridley knew he’d get a sweet pimpin’ cane, he would have tore his ACL a long time ago. Ridley’s season appears to be finished, and logic would dictate Shane Vereen being the largest benefactor. WRONG, WRONG!!! This is Bill Belichick we’re talking about. LEAVE LOGIC OUT OF THIS!!!! Brandon Bolden will get his share of the work between the tackles without Ridley around. Or possibly James White. Or, maybe, it’ll be my favorite New England running back – some guy I’ve never heard of. Bolden is the top spec add if you have the bench room, but investing in the Patriots backfield generally results in negative ROI… Is there a petition we can collectively sign to get Antone Smith more touches?… It’s going to take an Eddie Lacy injury to make James Starks a starter in standard formats, but in deeper leagues, he’s getting enough work – double-digit touches in each of the last two games – to be a non-zero player. And anyone playing in a 16-team league knows the value of that… Jonathan Stewart could be back for the Panthers in Week 7. Temper you mild enthusiasm… PPR ALERT: Dexter McCluster: 6 catches. 52 yards… Everyone still super fired up for Storm Johnson? Didn’t think so. Johnson’s worth a stash, if you have no one better, in a 12-team league based on potential opportunity, sure. But, ask yourself: If I’m playing Storm Johnson in my starting lineup, do I have the worst team in the league? Answer: Yes. I’m close to certain his value is directly linked to his name. Truthfully, how many people do you think would have picked him up this week if his name was John Johnson? He’d merely be another Jordan Todman… No word on how serious Darren Sproles’ knee injury is just yet, so Chris Polk is sneaky grab in deeper formats. Anytime you can get a piece of the Eagles’ offense, it’s generally recommended. Philly goes on bye in Week 7, so adding Polk isn’t a priority, but it’s a decent hedge if Sproles missed multiple weeks… Shot in the dark for pure upside purposes? Tre Mason. He’s very Crowellian.

Victor Cruz tore his patellar tendon and dropped a TD on the same play. Cruz is done for 2014. If you play in the sort of league where Rueben Randle is on the Week 7 waiver wire – weird – time to start spending your FAAB bucks. If you’re lacking FAAB funds, Odell Beckham Jr. is the next best thing and comes at a discount. Either way, you’re going to want one of them… Whenever Cecil Shorts III is healthy, start him. Yes, there are rumblings he’s going to be traded, but until that happens, be satisfied you own the first look on a team that’s always passing. 16 TARGETS FTW!!! If you missed out on CSIII, Allen Robinson continues to be peppered with targets too. He’s averaging 9.25 over his past four games… I took a shot on Brandon LaFell in a few leagues and got super lucky. He’s going to be involved, but I refuse to believe he’ll average a TD every 3.7 receptions. I mean, he’s not 2002 Marc Boerigter. LaFell is a decent roll of the dice if you’re stuck for a FLEX, but don’t make the mistake of trusting him. Rinse and repeat with Brian Tyms… Robert Woods however, is an excellent PPR bench guy. Working as the Bills possession receiver, he’s a large part of their low risk offense. Woods won’t find the end zone very often, but he’s been on the end of at least eight targets in three of the last four games… James Jones. Pick him up. I DARES YA. Andre Holmes too. He’s busted out the last two games collecting 195 yards and three scores. And don’t kid yourself, it’s all about attrition: Holmes has 20 targets those games… Don’t be snorlaxing on Markus Wheaton, ya hear? He’s yet to put it all together in a single game, but his breakout beckons. Wheaton actually saw more balls fly at his face (he just thought the balls were haunted by ghosts) than Antonio Brown against the Browns – 11 targets to 10… Mohamed Sanu WENT OFF. He won’t do that as often when A.J. Green and Marv Jones are on the field. He’ll be awesome when they’re not, though…  Jarvis Landry is officially a better Fantasy option than Brian Hartline. Landry soaked up eight targets producing a 6-75-1 line versus the Packers. Plus, he possesses the ability to score on special teams. Hartline has the ability to score never… They both found paydirt, yet Malcom Floyd remains the better add off the Week 7 waiver wire than Eddie Royal. When Philip Rivers takes shots downfield it’s in Floyd’s direction… I’m giving the entire Browns receiving corps a mulligan. I’d wager Brian Hoyer will need to complete more than eight completions/win moving forward. Andrew Hawkins is still the best option, despite his Week 6 goose egg, followed by Miles Austin, then Taylor Gabriel. Entering the week, all three generated more points per route than any member of the New Orleans Saints. Probably because they’re all real lil’ and sneaky.

Wanna be an NFL receiver? Have sidelines awareness…

RED ALERT: Jimmy Graham is expected to miss the next 2-3 weeks. Not good. Amplifying the need for a replacement on the Week 7 waiver wire, Zach Ertz is going on bye. Travis Kelce is the best available replacement according to the ownership numbers, but I’m guessing he’s owned in all competitive leagues. So, I’ll be turning to Owen Daniels for sheer safety. He has the highest weekly floor of these dregs… Dwayne Allen is generating buzz, but if he’s not finding the endzone, he’ll be sort of useless. Fortunately, Allen draws the Bengals. Cincy was the third most generous defense to tight ends ENTERING Week 6. Then Greg Olsen dropped 62 and a TD on them. It also means Coby Fleener is worth a flyer, if you’re truly in need… Ben Watson may be serviceable filling in for Graham because of how engrained the tight end is in the Saints’ playbook. But, he’s still Ben Watson, there’s only so much he’s capable of. And, he could lose targets to Josh Hill. Pass… Jace Amaro is going to be hot pickup after stuffing the stat sheet against Denver. Yes, Amaro will have big games again, you’re just never going to know when. Don’t rely on #GENOPICKS for consistency… In PPR leagues, Kyle Orton is making Scott Chandler semi-relevant. Fat Keanu’s showered Chandler with 15 targets in his two starts and the opportunity translated into real numbers against the Pats: 6 catches, 105 yards.

If you just want a QB to stash, Teddy Bridgewater is still the highest upside option. Blake Bortles would be second on a stash list, but Mike Glennon doesn’t trail him by much… For streaming purposes on the Week 7 Waiver Wire, Joe Flacco, fresh off a 5 TD outing (A Pat Mayo recommendation!!!) inherits another solid matchup against the Falcons… The Jags made Charlie Whitehurst seem competent in Week 6, giving Brian Hoyer the potential for a massive day… You’d only assume Carson Palmer will be healthier next week when he’s in Oakland. Palmer has the best blend of matchup and weapons. Although, I worry Arizona’s defense may take the ball out of his hands.

The Texans D became the fifth home defense in six tries to finish as a Top 10 unit for the week, despite giving up 33 points. Just imagine how many points Belichick + Thursday + Geno will produce… Sticking with the trends, Jacksonville has yet to limit the opposing D/ST from scoring double-digit points. Hello Cleveland… Expect Buffalo’s D/ST to be cut loose once the Week 7 waiver wire deadline passes following its shameful performance Sunday. That’s when you pounce. We just witnessed the Lions defense dismantle the Vikings, and the Bills set up basically the same way… The Eagles are an elite Fantasy defense right now. They likely have an expiry date, turnovers aren’t quite this sustainable (ask KC D/ST circa 2013), but they’ll probably be dropped in most leagues as Fantasy owners tend to avoid holding two D/STs. Philly is an exception. Scoop ’em up.