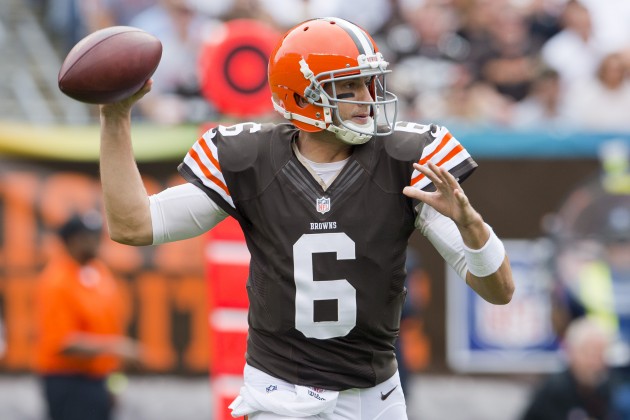 On the surface it would appear that Brian Hoyer‘s placement atop this list would have more to do with his opponent than anything else, but let’s not ignore how well he’s been playing so far this season. Not only does the Browns’ QB have an impressive 7:1 touchdown to interception ratio, he also has incredible big play potential with the highest aDOT (10.7) of any quarterback to make all of his starts in 2014. Now, aDOT is a tricky statistic – it doesn’t mean a whole lot if one continues to throw deep with diminishing returns, yet this is far from the case with Hoyer. The former Spartan is 15 for 24 on passes over 20 yards through five games which, with an added catchable drop, would give him a true accuracy of 66.7% on deep balls. This percentage doesn’t just represent the best mark in all of football, it actually makes Hoyer the only QB in the league to sit above 55%. All this bodes quite well with Cleveland on their way to Jacksonville for Week 7 considering the Jaguars have given up an NFL-leading 32 pass plays of 20+ yards this season. Really, they’ve only been slightly better in every other sense of their passing defense. Jacksonville has surrendered the third most passing yards per game (294.0), the third most yards per attempt (8.3), and have just one interception through six games. Basically, Brian Hoyer is going to be a Top 10 QB this weekend. Make sure you’re on the bandwagon.

The Green Bay runningback situation has been a fantasy mess so far in 2014. Eddy Lacy somehow burrowed his way into the Top 5 in some drafts and, aside from a Thursday night contest against the Vikings, has been nothing but a massive disappointment. Then there’s James Starks who’s seen a near split in touches some weeks dissolve into not getting a single carry Week 2 against the Jets. It’s frustrating, but it shouldn’t keep you from seeing Starks’ value this week against Carolina. Don’t let the sepia-toned memories of 2013 fool you – the Panthers’ defense is absolutely terrible this year and it all starts with their inability to stop the run. Coming into last week’s game with the Bengals, a 75 minute stretch where they would surrender another 193 yards on the ground, Carolina already had the league’s fifth worst run defense according to DVOA while they currently have given up the second most fantasy points to RBs on the year. Yet, it’s not the overall total that’s intriguing, it’s that the Panthers have been bad enough to allow tandem success. In three of their past four games, the lone exception being a Bears team still using a true feature back in Matt Forte, Carolina has surrendered 10+ fantasy points in PPR formats to two RBs on the opposing team in Gio Bernard and Jeremy Hill, Justin Forsett and Lorenzo Taliaferro, and Le’Veon Bell and LeGarrett Blount. Even if you don’t believe that the Packers will truly be using a backfield platoon (though the 77 snaps were split 39/38 for Lacy in Week 6 against the Dolphins), believe in the Panthers’ ineptness. Pick up Starks.

The question through three weeks in New England was simple: Who, aside from Rob Gronkowski and Julian Edelman, was Tom Brady going to be able to trust? Well, over the past 21 days the answer has become quite clear. After playing just 52.6% (121 of 230) of the Patriots snaps their first three games of the season, Brandon LaFell has seen that number jump by more than 30% since a Week 4 match-up with Kansas City. At 84.4% (179 of 212), the former Panther has seemingly secured his place near the top of New England’s WR depth chart, while a two touchdown performance last week against the Bills won’t hurt either. Now, just like with any Patriots skill position, LaFell could prove to be inconsistent and, therefore, incredibly frustrating, but he’s still averaged six targets a game over the last three weeks. The match-up will also be there in Week 7 with New England going up against a porous Jets secondary that has given up an NFL worst 15 passing touchdowns so far in 2014. Though that’s only translated to surrendering just the 11th most fantasy points to wideouts, I’d still have no issue flexing LaFell this Thursday.

As I noted last week, the play is to always stream defenses against Jacksonville. Tennessee became the sixth straight defensive unit this season to put up a double-digit total versus the Jaguars and they did it without even scoring a touchdown. But, if you are unable to grab the Browns, Minnesota might not be too bad a back-up plan. Buffalo has given up an average of eleven points to D/STs the past four weeks, including three consecutive 10+ marks to New England, Detroit, and Houston. The Bills have also allowed 12 sacks since Week 3. The Vikings might not have the best defense in the NFL, but they’ll still be playing Kyle Orton, so, you know, it evens out.