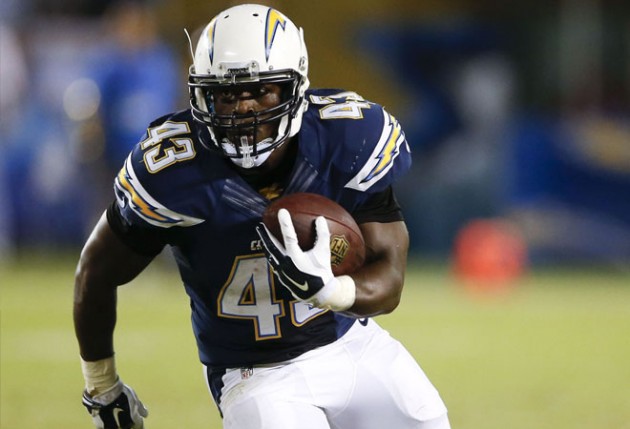 FNTSY Sports Network’s Pat Mayo & Laura Diakun run through the top Week 6 pickups and stay aways at running back, telling you how to approach Ronnie Hillman, C.J. Anderson, Branden Oliver, Shaun Draughn, Andre Williams and Peyton Hillis as Week 6 pickups now that their opportunity’s increased because of injuries. Mayo also updates his RB stash power rankings, explaining why Antone Smith should be considered along with names like Isaiah Crowell, Jerick McKinnon and Lorenzo Taliaferro to occupy the back end of your bench.

Ronnie Hillman is the only potential game changing RB sitting on the Week 6 waiver wire. Remember: potential. His value is completely tied to the status of Montee Ball’s injured groin. Ball was spotted on crutches after the game and a lengthy absence would transform Hillman into a fringe Top 10 running back. He’d basically be Andre Ellington, but in a far more Fantasy friendly environment. Are we going to know the true extent of Ball’s status by the time waivers pass? Probably not. As of now, Ball is expected to be “out a while.” Concrete stuff right there. Welcome to the age of internet reporting. Let’s say the team makes a statement, are we expected to actually believe it? Two weeks ago, Jamaal Charles suffered a high ankle sprain, an injury that has a four-to-six week recovery time. Charles missed one game (which he almost played in) and was back to full strength by Week 4. Everyone heard “high ankle sprain” and had a FAAB orgasm on Knile Davis. Didn’t really work out. Hillman is going to be a gamble, but one with tremendous upside. And off the waiver wire, what more do you want? Put it this way: If Ball was out for the year, I’d blow close to my entire FAAB budget on Hillman. If it’s only a four-week problem (which my Week 6 Waiver Wire Power Rankings reflect. Why? Because that’s what I’m guessing, OK? ), I’d put in a moderate bid based on my running back situation. If I need immediate help, I’d up my bid. Here’s the one caveat: C.J. Anderson could be a factor if Ball misses time. He was a healthy scratch Sunday, yet, had been ahead of Hillman on the depth chart since the middle of the preseason. You must weigh Anderson’s involvement while assessing the risk of picking up Hillman. If you don’t want to splurge on Hillman or don’t have the necessary FAAB dollars to get him, I’d toss a sawbuck or two towards Anderson. Actually, that is precisely what I’ll be doing in all my leagues. Anteing up to get a piece of Denver’s offense is a worthwhile bet whether it works out or not. Stay up to date on the entire situation with me on Twitter – I’ll rap about it with ya. ORRRR, better yet, just tune into FNTSY Sports Network. This is literally why we exist… Don’t expect Top 10 RB performances from Justin Forsett every week. That’d be foolish. But, it’s becoming evident that when the Ravens aren’t blowing out the competition, Forsett is who they trust standing next to Joe Flacco. He was brought to Baltimore because of his familiarity with Gary Kubiak’s one-cut running game, but it’s his efforts in the passing game that will keep him on the field. His 23 receptions place him inside the top five of all RBs and, most importantly, his pass blocking rates much better than both Bernard Pierce and Lorenzo Taliaferro. Like, significantly better. Forsett’s carries will waver up and down week-to-week, however, the catches make him worth owning. I still think Taliaferro has the most long term value, for now though, this is Forsett’s gig to lose. And, who knows, maybe he’ll keep it… Donald Brown’s concussion left a gaping void in the Chargers’ backfield with only Branden Oliver aka fake Darren Sproles aka Max Mini remaining to fill it. With Danny Woodhead out for the season, and Ryan Mathews at least another week away from returning, Oliver could inherit the bulk of touches should Brown be unavailable next week. But, temper expectations. While Oliver could solidify himself as the starter for the rest of the season, he’s far more likely to morph into the new Woodhead once Mathews comes back. That’s valuable, no doubt, especially in PPR, but don’t blow your entire FAAB budget on him. People gravitate towards huge performances they’ve just witnessed, allowing that to dictate their bids, and after a two TD performance, Oliver will have Fantasy players in a frenzy. I recommend a reasonable bid of around 25-percent of your budget – any more is a too risky for me. If Brown can’t go against the Raiders in Week 6, Shaun Draughn will see work between the tackles… In the stash POWER RANKINGS Isaiah Crowell holds his lead on Jerick McKinnon, but Antone Smith has entered the fray as well. I’d be interested to see what he could do with 10 touches a game. Probably more things resembling this…  The Panthers backfield is a mess. No word on whether DeAngelo Williams or Jonathan Stewart will be healthy enough to suit up against the Bengals in Week 5, and even if they remain out, spending a bundle on Darrin Reaves or Chris Ogbonnaya would be unwise. Both are deep league plug-and-play options only… If you have the space, Joseph Randle has Knile Davis-type upside should anything happen to DeMarco Murray. The Cowboys offensive line is so good that even Trent Richardson might be able to average 3.7 yards per carry behind it. OK, 2.7. Still, that’s saying something… George Winn is intriguing if Reggie Bush and Joique Bell’s injuries are more serious than anticipated. File Winn away in the “let’s wait for more news” section… Ditto for Andre Williams. He’ll possess tremendous value should Rashad Jennings’ knee sprain turn out to be more severe than expected, so adjust accordingly when the results of Jennings’ MRI are made public. The initial prognosis is that it’s not so bad, though. Peyton Hillis would get a bump in value in PPR formats should the worst be revealed. Mainly because Williams can’t catch… Zac Stacy left with a calf injury. Benny Cunningham filled in admirably during garbage time, but don’t read too much into that performance since Stacy should be available in Week 6.