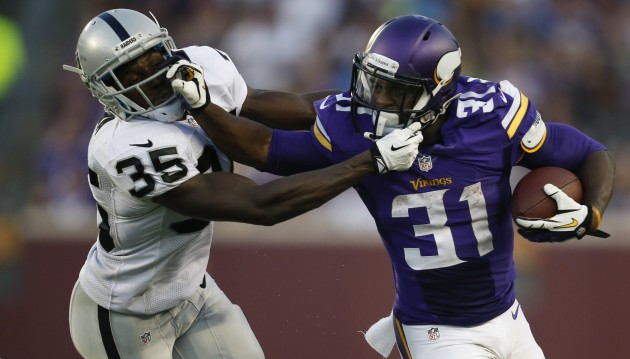 FNTSY Sports Network’s Pat Mayo and Brian Flood recap the Week 4 NFL injury report and talk through Mayo’s Week 5 Waiver Wire Power Rankings. They address the panic being expressed by LeSean McCoy and Cordarrelle Patterson owners and tell you what to look for in return if you’re buying or selling either player. Plus, the guys break down the most important things to look at before spending your FAAB dollars, specifically, how have your league mates bid in the past and what are your current team needs?

Remember all that upside everyone talked about with Jerick McKinnon? Well, we actually got a glimpse of it against the Falcons. After being out touched 33-to-8 by Matt Asiata through two non-Adrian Peterson weeks, McKinnon was a much larger part of Minnesota’s offense in Week 4, balancing the scales of justice, nearly matching Asiata’s 23 touches with 19 of his own. Moving forward, it appears McKinnon will be in more of a timeshare instead of his previous change-of-pace role. However, temper expectations. Asiata still dominated the goal line touches and remained a larger part of the passing game, so it’s going to take a couple of big plays every week for McKinnon to have consistent value. I doubt these 19 touch games are something we’ll witness too often. Expect something more in the 7-15 range as a realistic projection… Even with Bernard Pierce healthy, Justin Forsett dominated the “real” action in the Ravens backfield. Forsett finished with 94 yards on 17 touches and was utilized as the featured back while Carolina was still competitive. As the score started getting out of control, Lorenzo Taliaferro saw a lot of action; it’s how he ended up with 15 carries and score. Long term, Taliaferro persists as the best option from this backfield, but who knows when he’ll assume the gig? For the foreseeable future, Forsett is the Ravens RB to own if you need to start one. Honestly, I can see this entire situation evolving into a weekly guessing game, leading to a bunch of bench mistakes. I’d actually avoid it all together, unless I was desperate… With Ben Tate rumored to regain his starting job upon a return to health, many have already begun to sour on Terrance West and Isaiah Crowell. DON’T!!! I’m still stashing Crowell wherever I can in the belief he’ll eventually have the job to himself. It may take until mid-season, but it will be worth it… Jonathan Stewart, Fozzy Whittaker and Mike Tolbert were already out for the Panthers, and now DeAngelo Williams may be joining them on long term leave with an ankle issue. Carolina: That’s why, you don’t spend money on running backs. So, where do you turn when hopelessness beckons? Superman, of course. Darrin Reaves filled in as the primary Panthers ball handler after Williams exited the game, and would be projected to retain that role should Williams not be able to SUIT UP in Week 5. And with a very favorable matchup against the Bears, he’s worth a spec add if you need some RB assistance. Reaves’ practice squad bro, Tauren Poole would serve as the backup… It was encouraging to see Branden Oliver get more involved for the Chargers, but like Roy Helu and Dexter McCluster, he’s more of a deep league PPR option… Travaris Cadet, seriously? Pierre Thomas is either injured and not telling anyone or sleeping with Sean Payton’s wife.

With Brian Quick and Andrew Hawkins exiled to byes in Week 4, many will simply forget about them on the Week 5 waiver wire. BIG MISTAKE. They’re the two top WR pickups – Don’t get that clouded. Plus, you’ll be able to get them cheaper than you would in a normal week. This duo presents the biggest savings outside of Donny’s Discount Gas… Cecil Shorts is hurt again, and I’m beginning to foresee – CALL ME NOW – Allen Robinson (or maybe Marqise Lee when he’s back) usurping CSI(II) as that random Jags receiver that no one likes, yet produces consistent PPR value week after week anyway. There’s one every year, dating all the way back to Jimmy Smith.  I hate Eddie Royal; but I love real FIRED UP Philip Rivers. I’m torn. Color me agnostic on Royal. I think he’ll disappear too often over the course of the season that you’ll likely end up tossing him back on the free agent garbage pile. Probably multiple times. He’s the “end up on every team” guy. He is every year. I guarantee one of your “doesn’t really pay attention, but is still somehow in it” league mates will start him against you in a critical Week 12 matchup, and he’ll score 26 points. Or zero. More likely zero. Evan Silva quantifiably expressed this ROYAL SCARE more concisely – FEWER THAN 140 CHARACTERS!!! – than I could ever hope to be able to attempt of thinking of writing about why I’d be weary of owning Eddie Royal the remainder of the year. I’m guessing this is why my guy Silva crushes me in the Twitter game. Look, if you really lack WR weapons, Royal does have a chance of being a potential Top 25 option at the position for all of 2014. I just don’t think the probability of that happening is deserving of the FAAB bid it’s going to take to get him coming off another good week. I’ll take Malcom Floyd for a buck instead… Don’t forget, Marvin Jones is ready to make his 2014 debut… I loved how much Teddy Bridgewater loved throwing to Jarius Wright. However, with Teddy Football exiting with an ankle injury and the Vikings playing on a short week, you can save cash and make this pickup next week. Although, if you have the bench room, I’d actually make this move now for a few Rubles and give Wright a three week tryout on my squad. Like with Quick, Crowell, Tre Mason and Travis Kelce I think there’s may be a bounty of long term upside to be gained… LOUIS MURPHY!!!!!!! 11 TARGETS!!!!!!!!!!!!!!!!!! There’s no word yet on how serious Mike Evans’ groin injury is, but Murphy is clearly a favorite of “Secret Bald” Mike Glennon, and Glennon’s now going to be starting on a more permanent basis in Tampa… Devin Hester keeps doing stuff. Cause he’s fast.

What kinda football fan are you?

Make it consecutive weeks where the most exciting thing gets negated because of penalty. Don’t care, holding or not, this is why Aaron Rodgers is the best player in the NFL…

You should have listened on Larry Donnell. He’s very much for real. Now it’s going to cost you big on the Week 5 waiver wire… Garrett Graham gets the Cowboys. Note: Dallas bleeds Fantasy points to TEs. Graham’s only a one-week plug-and-play, though… Clay Harbor: Tight ends are a rookie QB’s best friend… For the upside stash TEs, I still like Travis Kelce best. Rookies Eric Ebron, Austin Seferian-Jenkins and Jace Amaro flashed a few flickers of their future potential, but don’t sleep on the fact that viable rookie tight ends in Fantasy are basically nonexistent. Of the three, I like EBRON JAMES the best. All things being equal, give me the best passing situation.

Teddy Bridgewater looked pretty awesome didn’t he? He left via cart with an ankle sprain, leaving his status in doubt for Thursday night. Still, as long he’s not out indefinitely, he’s the only QB from this group that has the Fantasy upside to be an every week starter for your team… Maybe Blake Bortles too. I just don’t like having to consistently rely on garbage time numbers… For deep leagues or those with a SUPERFLEX, Mike Glennon, Brian Hoyer and Austin Davis all have supremely soft matchups in Week 5. How bad is Tennessee’s defense, btw?

An early look at the Week 5 waiver wire reveals a slew of streamable D/STs. Bridgewater may not go for the Vikings, it could be Sister Christian Ponder, and it’s not an ideal situation anyway. Green Bay’s defense isn’t classically good, but the Packers may get up by enough to force Minnesota to take to the air just a tad too often. Projected result: TURNOVERS!!! Plus, home defenses (except for the stupid Redskins) usually kill it on #TNF… The Browns may get Charlie Whitehurst, the check down Jesus. Good enough for me… Ditto for Austin Davis… Copy and paste for E.J. Manuel, #GENOPICKS and SHITZMAGIC… Oh, and Jacksonville has ceded double-digit Fantasy points to every opposing D/ST this year. So, them too. Like I said, a slew of streamable D/STs.