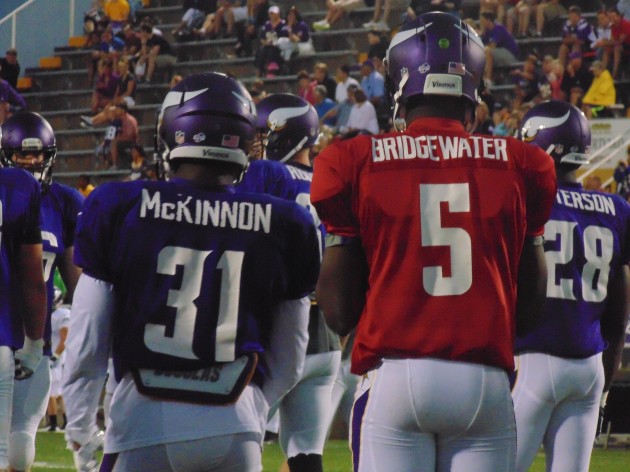 Remember when Austin Davis threw for 327 yards and three touchdowns against Dallas in Week 3? Yeah, no one else does either. Still, even with the possibility of Shaun Hill returning this Sunday, Davis (and to a lesser extent, Hill) deserve a look in two-QB leagues as a Ryan Tannehill replacement based on sheer match-up alone. Philadelphia has given up the third most fantasy points to quarterbacks through four weeks, a group that includes such vaunted names as Chad Henne, Colin Kaepernick, and Kirk Cousins. Plus, to be completely honest, Davis has been pretty good since taking the reigns of the Rams offense. Not only is the undrafted rookie leading the entire league in overall completion percentage at 72.3%, but that number translates to deep passing as well. Though Davis doesn’t have nearly as many deep attempts as Nick Foles (who has the most in the NFL at 39 compared to Davis’ 12), he’s completed only three less of his 20+ yard throws and, when factoring in a drop, he again has the highest accuracy rating at 66.7%. Davis also has a very respectable 64.5% yards in air percentage, demonstrating that Davis’ yardage totals are predicated more on routes than YAC – making them far more sustainable. Now, clearly there isn’t going to be a run on QBs this week with an incredibly light bye week schedule, but if you need a filler in a deeper format, Davis is your guy.

To say that Jerick McKinnon will be a popular pick-up this week is a massive understatement. Ever since the suspension of Adrian Peterson, people have been quick to point out that while Matt Asiata would be the initial incumbent – he’s not overly good, leaving the door open for the unproven, but far more intriguing McKinnon to get touches. Well, it finally happened last Sunday, with the third round pick finishing second for the week with 138 rushing yards on 18 carries, specifically showcasing the big-play ability that separates him from Asiata on a 55-yard sprint. Now, long-term, I feel like we all still have to temper our expectations. While McKinnon did look fantastic, it was Asiata who received the bulk of the goal line carries – a trend that won’t alter any time soon. Also, this performance happened to come against the team currently surrendering the most fantasy points to RBs: the Atlanta Falcons. However, for Week 5, with Minnesota having a similar match-up in the Packers, McKinnon is a flex dream. Green Bay surrendered 235 rushing yards to Chicago last weekend, allowing not just Matt Forte, but Ka’Deem Carey, to rack up a staggering 5.7 yards per attempt. Through four weeks, the Packers have given up the 5th most points to RBs in PPR formats, with opposing backfields accumulating 131.8 yards per contest. With the Vikings clearly nearing something closer to a true RB split, McKinnon played 34 snaps to Asiata’s 45 against Atlanta – this compared to a 40/87 split in Weeks 2 and 3, McKinnon is worth the price if you need him as a start in Week 5. If not, let someone burn their FAAB and pick him up after a tough Week 6 draw against Detroit.

For those in shallower leagues who have been keeping an eye on John Brown, last week’s bye was a blessing. Brown scored two touchdowns in Week 3 against the 49ers, but his buzz has cooled (much like that of Brian Quick, Andrew Hawkins, and Miles Austin) due to the week off. This works out perfectly with Brown’s Cardinals going up against the Broncos this Sunday in what should be a very back-and-forth affair with the added possibility of Carson Palmer returning. Now, it’s crazy to assume that Brown’s current pace will sustain – especially considering that it’s so intertwined with his touchdown total, but at the quarter pole of the NFL regular season, aside from Steve Smith, the rookie has the most fantasy points per snap at 0.31. He hasn’t seen less than four targets in a game, he has a more than respectable aDOT at 14.1 yards, and he actually has a higher catch rate at 60% than both Larry Fitzgerald and Michael Floyd. Obviously Brown’s targets are dwarfed by these two individuals, yet going up against a Denver team that has allowed the most wide receiver receptions per game in football (16), I trust Brown will get his share.

Honestly, it’s not the best week for streaming defenses. A middle of the road Steelers team has a good match-up with Jacksonville, but while as an actual team they’ve been atrocious, Jacksonville’s offense hasn’t been terrible. Still, they’ve allowed an average of five sacks a game through four weeks giving Pittsburgh a higher floor that most units. The same concept goes for the Jets who, while definitely facing a higher caliber team in San Diego, have accumulated 14 sacks so far this season – a league best. Still, my top pick this week will be the Cleveland Browns who will either be taking on the inaccurate Jake Locker, the journeyman Charlie Whitehurst, or the rookie Zach Mettenberger. The Browns biggest issue on D in 2014 has been their secondary. They’ve surrendered 272 yards per game this season. I don’t expect this to be the case with two weeks to prepare for an underwhelming Titans squad.