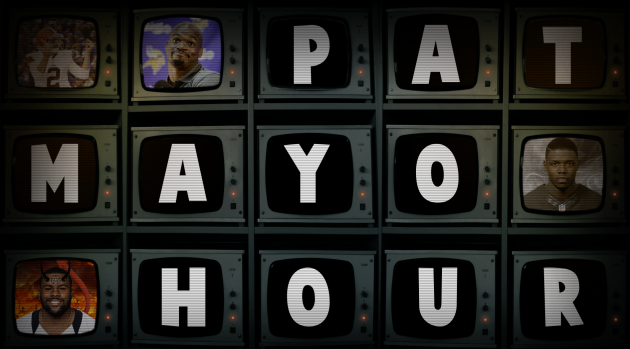 FNTSY Sports Network’s Pat Mayo runs through the NFL Injury report and debates his Week 16 Waiver Wire Pickup Power Rankings for every position with Jake Ciely. The guys chat the top streaming QBs and DSTs for the Fantasy Championship. Plus, what do to about benching superstars and using your full roster in the Fantasy post-season.

Don’t have a DraftKings Account? Well, you picked right time to join. Sign up here and GET AN ADDITIONAL $25, on top of your regular deposit BONUS. So, register for DraftKings NOWWWWWW!!!!!

LeSean McCoy has a “minor” MCL sprain, he left the game and never came back. His status is murky for Buffalo’s Week 16 home date with Dallas. Karlos Williams should get the nod if Shady can’t go, but anticipate a dose of Mike Gillislee too. [UPDATE: McCoy done for the year with a torn ACL]

Adrian Peterson suffered an ankle sprain, but was able to return after a brief trip to the locker room, with little success. Jerick McKinnon looked good in spot duty, yet will likely cede goal line work to Matt Asiata if Peterson sits. Peterson isn’t expected to miss time, however, the Vikings have just been FLEXED into Sunday Night Football, so if his status isn’t clear, it’s going to be a giant pain in the ass when setting your lineup.

Poor Shaun Draughn. He was actually running well until banging up his knee and taking a seat on the sidelines. It looks like Kendall Gaskins would assume between the tackles duty with Travaris Cadet exclusively working third down if Draughn is done.

Melvin Gordon injured his knee. No big deal. This opens up touches for Donald Brown if Gordon ends up sidelined. [UPDATE: Gordon placed on IR,]

Danny Amendola limped into the locker room and didn’t see the field again. Not because he’s suddenly blind, no sir, but he hurt his knee. With Julian Edelman not expected back until Week 17, Keshawn Martin would see a bump in snaps, and maybe the freshly acquired Leonard Hankerson would get some extra run too.

Alshon Jeffery tweaked his hamstring after hauling in a TD and never came back.

AJ Green injured his back, so he took a seat on the bench with Cincy playing a noncompetitive game in San Fran. Expect him to be in uniform for the Fantasy Championship, albeit in a terrible matchup against Denver.

Odell Beckham Jr. has been suspended one game. Appeal pending.

Marcus Mariota was forced from action with a sprained MCL in his knee. Zach Mettenberger will fill in, poorly, under center for the Titans if the injury is serious. [UPDATE: Mariota is doubtful because of the sprained MCL]

TJ Yates blew out his ACL sliding to avoid contact. Brandon Weeden finished the game for the Texans, who are now praying Brian Hoyer can pass concussion protocol before Houston travels to Tennessee.

Andrew Luck could potentially return against the Dolphins. [UPDATE: Luck will not Week 16.]