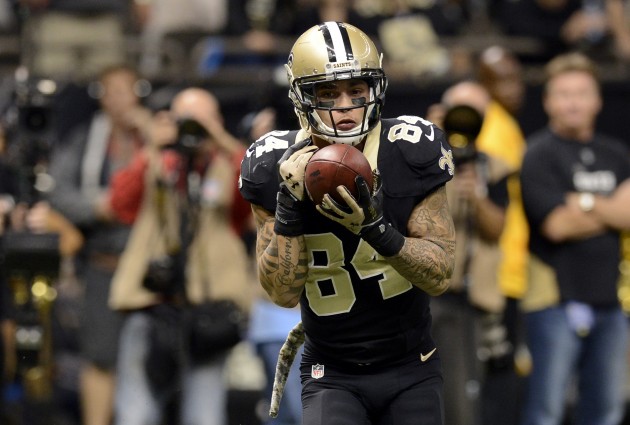 FNTSY Sports Network’s Pat Mayo and Kyle Soppe recap the Week 13 NFL injury report and debate Mayo’s Week 14 Waiver Wire FAAB Rankings. They address how to approach bidding for need versus depth, which defenses and QBs make the best streams and how each player on the Week 14 Waiver wire should be assessed differently based on your roster construction. Plus, the top pickup strategy and defenses to stash now for the Fantasy playoffs.

Daniel Herron and that horrible Trent Richardson split 16 carries. The verdict: Herron 88 rushing yards, T RICH 12 rushing yards. BOOOOMMMMM… Apparently Doug Martin isn’t completely washed up after all. Who woulda thunk? Martin finished with 19 touches, only for 61 yards, but did find pay dirt. If he continues to see the majority of snaps in the Bucs’ backfield, he could be a respectable FLEX option in Week 15 against Carolina. Not so much this Sunday in Detroit however… No word yet on Latavius Murray’s concussion status, but if he continues to to sit out, Marcel Reece has sneaky value in PPR leagues. Reece led the Raiders in receptions, yards and targets against the Rams… Jonathan Stewart breached 100 total yards for the first time since Week 11, 2011. By my calculations, he’s in line for a giant game Week 14, 2017… Theo Riddick won’t have any use if Reggie Bush can manage to get back on the field against Tampa. If Bush sits out again, Riddick’s a worthy option in PPR leagues… No, Matt Asiata isn’t very good, but if Jerick McKinnon’s back forces him out for another game, Asiata will be one of the few RBs on the Week 14 waiver wire that could get 20 touches. Ben Tate III, who apparently just discovered his dad and grandfather share his name, got some work late, but Asiata is the better grab if you’re desperate for the assistance. Although, expect McKinnon to get his starting job back if he’s healthy…LeGarrette Blount saw more than triple the carries of anyone else in the Patriots’ backfield, and Brandon Bolden got the TD. Blount’s the guy to own, but he’ll be maddening… Andre Ellington suffered a hip pointer, but he’s not considering it serious. Please, don’t FREAK OUT and consider Marion Brice or Michael Bush MUST ADDS!!! If Ellington’s out and one is named the starter, then, mayyyyyyyyyybe, we’ll talk. Until then, treat the duo like they don’t exist… Rashad Jennings suffered an ankle injury towards the end of the Giants loss in Jacksonville but there’s been no more news on the severity of the issue. Monitor this situation very very closely. ANDRE WILLIAMS ALERT!!!

STRATEGY: If you don’t need an RB to start immediately, just grab an upside handcuff, whether you have the starter or not. While Daniel Herron is a nice add if you’re empty at RB2 or FLEX, if he’s just a bench guy, you’re better off rostering Juwan Thompson, Knile Davis, Joseph Randle, Alfred Blue, James Starks or Ka’Deem Carey, who would morph into Top 15 RBs if anything happened to the guys in front of them.

Daily Fantasy players were salivating all week for Kenny Stills’ discount price tag on both FanDuel and Draftkings, and he paid off big time. Stills is available in far more leagues than I would have guessed and is the THEE priority pickup on the Week 14 waiver wire. New Orleans closes: vs CAR, at CHI, vs ATL –  it doesn’t get much better. Consider Stills a Top 25 WR rest of the season… Sometimes game flow is overlooked when assessing pickups. Stedman Bailey racked up 100 yards on five receptions, all of which came in the first half, when the Rams still had incentive to throw. Bailey’s become Shaun Hill’s favorite weapon the last two weeks (12 catches, 14 targets), and St. Louis has a surprisingly soft schedule for receivers to finish the Fantasy season: at WAS, vs ARZ, vs NYG. I prefer the consistency of his usage over the flashier, big play reliant WRs on the Week 14 waiver wire… Don’t buy too much into Donte Moncrief’s GINORMOUS day. The rook was only targeted four times and did most his damage with the Colts up a ton. Love his potential, but relying on Moncrief as a starter in the Fantasy playoffs seems a tad insane. You’re not insane, are you? Moncrief’s for deep leagues only… DeSean Jackson was carted off the field in Indy and it looks like he’ll miss extended time, which opens up more targets for Andre Roberts… When Allen Robinson was lost for the year, I anticipated his ten targets a week to get distributed between Cecil Shorts III and Allen Hurns. While Hurns has seen a slight uptick in usage, it’s Marqise Lee who’s been the biggest beneficiary. Lee tied for a team high eight targets against the Giants, which is pretty solid, but there’s actually better news: Five of his 13 targets the last two games have come inside the 10-yard line. He even managed to convert one of those opportunities this week. In deeper leagues, I actually like him more than Moncrief for week-to-week consistency… I know Davante Adams had a satisfactory showing Sunday, but I’d have real trouble inserting him into my starting lineup with Jordy Nelson and Randall Cobb healthy. He’s just too up and down game-to-game. That said, Adams is the only WR handcuff worth stashing. Should the worst befall Nelson or Cobb, Adams would instantly become a MUST START… Don’t be concerned about Charles Johnson if you grabbed him last week. The Vikings defense basically rendered their passing game inert; there was no need for it up so many points. Once again, however, Johnson was on the field for nearly 100-percent of Minnesota’s offensive snaps and should be consider an upside sleeper next week against that awful Jets’ secondary… Robert Woods has seen a shade under eight targets per game over the last four weeks and is at DEN, vs GB, at OAK to finish the year. If you’re in need of a capable WR3/FLEX in a deeper formats, Woods may be the answer… Justin Hunter is likely heading to IR after lacerating his spleen. Kendall Wright and Delanie Walker stand to benefit from Hunter’s absence. Nate Washington too. Like Malcom Floyd, Kenny Britt or John Brown, Washington’s a burner that just needs one big play to churn out a productive week. And, without Hunter, Nasty Nate should get a few more looks than usual… Miles Austin won the “semi-productive Browns WR to play (non-Josh Gordon division)” award in Week 13. A title which earned him a trip to the emergency room after the game with abdominal pain. If Austin is out of the equation, Andrew Hawkins is a fringy start in any matchup.

No Tom, only winners get a new toy.

Colt McCoy is the best thing that ever happened to Jordan Reed. Seriously. Two games with McCoy has resulted in 16 catches (20 targets) for 163 yards and a score. Just beware, all this usage will probably cause him to pull a hamstring… Kyle Rudolph’s improved on the stat sheet every week since returning and now draws THEE top TE matchup of Week 14 against the Jets… No word yet on whether Dwayne Allen’s ankle will keep him sidelined again. If it does, Coby Fleener will remain in the Top 10 of the position. Just remember gang, he still does weird Coby Fleener things, like thinking about ghosts at the absolute wrong moment. At least I assume that’s what happened… If you’re forced to stream in deeper leagues, Scott Chandler inherits a nice matchup with the Broncos, who are the sixth most generous unit to opposing TEs this season… Jermaine Gresham gets a soft opponent as well; Pittsburgh’s given up a TD to a big man five straight weeks.

The Browns won’t name a starter until Wednesday (or so they claim), but it’d be hard to imagine Johnny Manziel not under center against the Colts. Maybe that’s just me projecting my excitement for my guy Johnny Football to get on the field. Either way, from a Fantasy perspective, Manziel possesses that ever-valuable ability to pile up rushing yards and, more importantly, rushing touchdowns. If he’s starting against the Colts, he’ll fall inside my Top 15 QBs in Week 14… Looks like Colt McCoy did enough to garner another start. He draws St. Louis at home in Week 14. However with the emergence of the Rams’ passing attack, I prefer Shaun Hill to McCoy as a streaming option… Think Ryan Fitzpatrick tosses another six TDs against Jacksonville? Ya, me either. Watch out for those frisky Jags btw. They’ve only allowed a QB to toss for multiple scores twice in their last eight games… You can probably find better than Mark Sanchez this week against the Seahawks, but he’s not a terrible start. Seattle’s defense has been noticeably worse on the road. You will want the Sanchize for Weeks 15 and 16, though – vs DAL, at WAS.

Here are my D/ST ranks for for the next three weeks. Pick and choose from what’s available on the Week 14 waiver wire now before the good ones get scooped up. While rostering multiple defenses is nonsensical early in the year, during the Fantasy playoffs, it’s simply considered smart.

***If Matt Schaub somehow ends up starting a game, please, stream against him