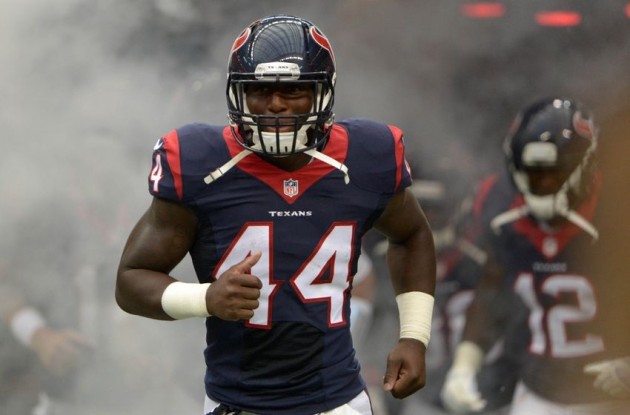 FNTSY Sports Network’s Pat Mayo & Laura Diakun run through the top Week 10 waiver wire pickups at running back. They tell you how to manage your FAAB budget, the RBs to target based on your specific team needs and league settings while discussing whether Alfred Blue should be the top Week 10 waiver wire pickup despite the lack of information concerning Arian Foster’s injury. They debate the remaining names: Ryan Mathews, Bobby Rainey, Charles Sims, Terrance West and Matt Asiata to help you determine which RB is best for you. Plus, they offer up two Week 10 waiver wire pickups – Anthony Dixon & Jonas Gray – telling you how each can potentially assist your Fantasy team.

The BIGGGGGGG week 10 waiver wire question surrounds the health of Arian Foster. Foster suffered a non-contact groin injury against the Eagles, went to the lockeroom and didn’t return. Pure potassium benzoate right there – that’s bad. Alfred Blue is the next man up in the Texans’ backfield and, while he didn’t look good whatsoever (1.9 ypc), Houston is fully committed to its running game and Blue will see the majority of the RB touches over Jonathan Grimes – Grimey. But herein lies the problem: we don’t know how long Foster is going to be out. Houston’s on bye next week but does get a fairly soft schedule starting in Week 11: Cleveland, Cincinnati, Tennessee and Jacksonville. From recent test cases – Montee Ball & Fred Jackson – expecting Foster to miss four-six weeks would be the most probable estimate. Except, the Texans may not reveal the extent of the injury before the week 10 waiver wire deadline, so you have to figure out where your team’s priorities rest, as you may have to go into this seeking blind salvation. If you need a starting RB for the next month or are Foster owner, you may have to break your FAAB bank merely as a precaution. The upcoming bye week may deflate the required FAAB bid necessary to acquire Blue’s services, but I wouldn’t mess around getting cute looking for a deal and end up missing out; it’s an awful situation for Fantasy owners. In leagues where I desperately need a quality RB2 for the short/long term, screw it, I’m taking the Nestea Plunge on Blue. For other teams where my RB corps is relatively solid, I’ll be putting in a smaller bid and praying I get lucky. Knowing how Fantasy Football works, we’ll all get Blue and feel good about it Tuesday night, then Wednesday morning we’ll find out that Foster is fine. Thems the breaks. Want the latest info, it’ll be here… The Chargers are also on bye next week, giving Ryan Mathews another 13 days to rest up for his return. Mathews is available in a bunch of leagues, and after San Diego’s heinous performance against the Dolphins, anticipate Mathews returning to his 15-20 touches a game… Hope you listened and didn’t panic drop Tre Mason after last week’s hiccup. Mason dominated the touches among the Rams’ RBs: Mason (20), Benny Cunningham (7), Trey Watts (1), Zac Stacy (0). Played Stacy? YOU GOT THE DUD!!!… If Denard Robinson is still on the Week 10 waiver wire in your league, I’m sorry to say, your league is garbage. Consider upgrading from rookie mode for 2015… Before getting too excited about Terrence West and his 16 touches against the Bucs, consider this: since Alex Mack went down for the year three weeks ago, Cleveland running backs have exactly two rushes of more than 10 yards. Two. And that’s on 76 attempts.  Apparently, the talent gap from Mack and to sub-center Nick McDonald is the difference between an excellent rushing attack and one that’s truly harrowing. Plus, week-to-week, it’s been impossible to project the Browns’ touch distribution. West is OK as a bench/bye week filler, nothing more. Moreover, I’m out on all Cleveland RBs as trustworthy starts until this awful line gives its collective head a shake and gets a grip… Please don’t get sucked in by Matt Asiata because of his three TDs. Unless you’re certain he’s going to score in that game, then you should expect three TDs; every time Asiata’s rushed for a TD in his career he’s completed the Troika. His presence as the Vikings’ goal line RB does suck away value from Jerick McKinnon, though. What a pisser… Everyone’s favorite RB pickup from last week, Charles Sims, was indeed activated from the IR/DTR Saturday afternoon, but he was still inactive Sunday against the Browns. Sims will likely make his career debut next week against the most generous defense to Fantasy RBs, Atlanta, but AT BEST, you’d have to figure he’s going to be in a timeshare with Bobby Rainey, assuming Doug Martin’s ankle keeps him out again. If Martin returns, God help us. We’ll have to create a Ministry of Backfield Confusion simply to launch a probe into the matter, just so we can guess properly. If I need a RB to start in Week 10, I’d go Rainey; if I needed one to stash away for future usage, it’d be Sims. Martin, he’s dead to me. Drop him… Jonas Gray’s poor showing presents a cheap buying opportunity on the Week 10 waiver wire for two reasons: 1) He may actually be dropped in a lot of leagues after his 33 yard outing against Denver. Don’t worry about that; the Broncos have been stingy to RBs on the ground this season. 2) New England is entering its mandatory week of rest, so people will simply forget about him. Gray won’t cost any more than a couple FAAB bucks and is definitely worth a flier if you’re desperate for running back depth beyond this week… Marion Grace won the “random Arizona RB who gets to steal Andre Ellington’s TD” weekly lottery!!! I suppose he’s officially Ellington’s handcuff now, not Stepfan Taylor. But, as we’ve seen with the Cardinals’ backfield, that’s not the most secure gig going. If it’s not Marion “The Barbarian” Barber (III), not interested… Bills RBs? You want Anthony Dixon over Bryce Brown this week… Lamar Miller banged up his shoulder. He’s expected to be OK for Week 10, but I’ve seen less turn into worse as news begins dripping out. As a precaution, keep Daniel Thomas and Damien Williams in the back of your mind. Or better yet, the watch list. That’s probably easier.