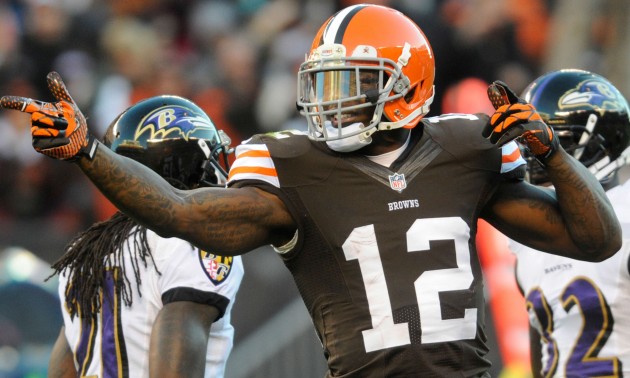 FNTSY Sports Network’s Pat Mayo talks with Wall Street Journal and Yahoo! Sports contributor Michael Salfino about the Fantasy impact the NFL/NFLPA deal to change its drug policy could have on Fantasy players. They discuss how much of your FAAB budget you should spend on acquiring Josh Gordon (all of it) and how he could be back in uniform for the Browns as early as Week 2. They debate whether or not you should start Gordon in Week 2 if he is active; plus, how the new agreement would affect Wes Welker & Justin Blackmon, and Fantasy spin on Cardinals WRs John Brown and Larry Fitzgerald.

Wide Receivers (For FAAB Budget of $100)

***Update: With the new NFL/NFLPA agreement likely to pass at any moment, the probability of Josh Gordon & Wes Welker being reinstated, and playing as early as this Week 2, is very much a live option. I’ve been advocating buying (and holding post-suspension) as many Gordon shares as possible since the beginning of June and I believe $81 is what it’s going to take to get his services. I understand that spending around four-fifths of your FAAB budget this early in the season is not for the conservative player, especially with the potential for not having an actual concrete resolution before waivers pass Tuesday night. I, however, am not risk adverse. This is the type of pickup that wins you a championship. I think he’ll be reinstated, and it’s not just me. Michael Salfino has been the Bob Woodward of the Josh Gordon lawsuit investigation with Cedric Hopkins working as Deep Throat. They’re ALL IN. Me? I’m  a guy who saw 10 minutes of All The President’s Men on a plane once. Either way, take the shot now and GET GORDON. And, if he doesn’t play, it’s not like your team was made any worse –  I’m sorry if you had to drop Rueben Randle, poor you

Kelvin Benjamin was legit with Derek Anderson under center; imagine what he can do with a healthy Cam Newton. Believe the hype… Still, I prefer Josh Gordon. It’s no guarantee that he’s going to play, don’t cloud that, but the probability is growing by the day. So think of it this way: Even if he only plays Weeks 12-16, he’ll be more than worth than any random pick up and stash… lol stash. I polled people on Twitter to find out what he was going for in their leagues over the weekend, and it was a mixed bag. Know who you’re playing against before making a bid, and tailor a wager around that, but as many of you know from my preseason (and post-suspension!) ramblings, I love Gordon. Grabbing a difference maker off the waiver wire is the single best way to win your championship, and Gordon more than qualifies as that type of talent. For the moment, however, Andrew Hawkins is going to be Brian Hoyer’s first look. Especially with Jordan Cameron banged up… Jordan Matthews had a bad game, good news for your FAAB budget… Moving forward, I like Marqise Lee over Allen Hurns. Mainly because Hurns has a super Kevin Ogletree vibe to him and I don’t want to waste the dollars that it’s going to take to acquire his services after a GIANT Week 1. The only way I’d pay up for Hurns? If every Fantasy site extended its team name character limit to allow me to use, “Mr… Hurns. I bad want… money now. Me sick” for my squad, I’d spend all $100… I haven’t looked at Green Bay’s complete schedule, but I’m fairly confident Jarrett Boykin won’t be matched up with Richard Sherman every week. Boykin will be fine… Don’t buy too much into Donnie Avery’s workload against the Titans. Dwayne Bowe is back next week… It didn’t matter if it was Shaun Hill or Austin Davis losing the game for St. Louis, they loved tossing it Brian Quick’s direction. He hauled in seven of his nine targets for 99 yards, but temper expectations. While I like Quick’s talent, and he is the WR you want to own in STL, the Rams’ passing game is going to be up and down each week; he’ll be tough to trust. Definitely worth a spec add, just don’t break the bank… Oh, and Markus Wheaton. He’s legit. You should get him… Total mixed bag from the Raiders receiving corps: James Jones and Rod Streater found pay dirt, but it was Denarius Moore that saw the most targets, despite doing nothing with those looks. Moore won’t cost a cent to add and makes him a solid deep flyer. Plus, the Raiders are experimenting new ways to get their players the ball.