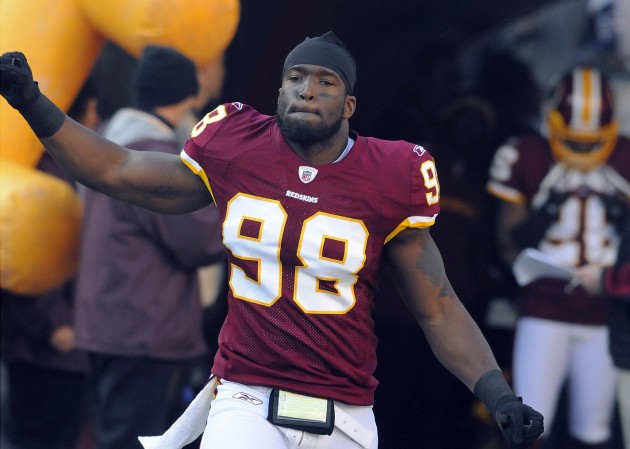 With bye weeks now upon us, the D/ST spot on your roster becomes much more difficult to fill. Every team in your league is going to own at least one defense and some owners may carry two, thinking that they can avoid this very issue. Using this week as an example, where we have six teams on bye, there are only 26 active defenses. That may sound like plenty to choose from in a 12 man league, but do the Cowboys, Jaguars, Buccaneers, or Packers really count? Or are you really adding a defense that is opposing an elite quarterback (Aaron Rodgers, Matt Ryan, or Andrew Luck for example)? Probably not, so the number of semi-reasonable starters is already down to 19, and that’s including a handful of options that are questionable at best (do you feel great about starting either defense in the Eagles/Niners game?).

As I am sure you are well aware, every point matters in a Fantasy matchup, so siding with a statistically favorable defense is just as important as making the right call at your FLEX position. I’ve already helped you on the offensive side of the ball for these Thursday Night contests, now let me take you inside the numbers and give you a hint as to how to approach these mid-week games from a D/ST standpoint.

In most standard leagues, defenses are primarily rewarded on three factors: points allowed, sacks, and turnovers forced. Defensive and special team touchdowns are also big point getters, but much like which kicker is going to score the most points in a given week, I find non-offensive touchdowns to be nothing more than circumstantial, therefore, they were omitted from this study (if you can predict which defenses are going to score, you’re probably not reading this column, as you have the D/ST aspect of Fantasy Football pretty well in hand). I crunched the numbers of both the offense and the defense in every single matchup, thus giving me a baseline for how many points/sacks allowed/turnovers we should have been expecting from both units in this specific matchup. This was done by averaging out the offenses production in the 18 (or 17 in the cases of teams that have played two Thursday night games since the beginning of last season) non-Thursday games adding it to the defenses average production and dividing by two.

Example: The Patriots offense average 27.61 points, allowed 2.56 sacks, and turned the ball over 1.22 times per non-Thursday game. The Jets defense allowed 24.78 points, recorded 2.78 sacks, and forced 0.89 turnovers per non-Thursday night game. So when they squared off, it would have been reasonable to expect 26.19 points allowed, 2.67 sacks, and 1.06 turnovers from the NJY D/ST.

There were minimal gains shown in both sacks (up 7.2 percent) and turnovers forced (up 6.3 percent) for defenses playing on short rest. Those gains may not seem like much, but with every sack and turnover forced the odds of a BIG defense play increase, and that is what can win you weeks. In addition to modest gains there, defenses are giving up fewer points in these games. The average defense allowed 19 percent fewer points that what the numbers suggested was the most reasonable outcome, a reasonably significant number that could result in a handful of Fantasy points. 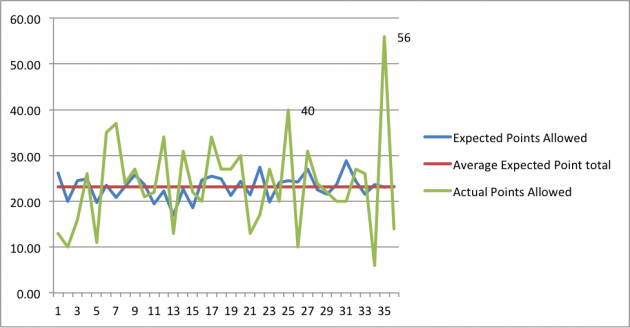 As you can see, only 15 of the 36 defenses gave up fewer points than the expected total, but they were significantly better than the numbers projected, thus telling me that Thursday Night defenses have a bit more upside than those on Sunday/Monday. Due to my belief that there is no such thing as a “safe” defensive play, the immense upside is worth the gamble. Consider this: if you subtract the 96 points allowed by the Packers on Thanksgiving (#TeamMattFlynn) and the Buccaneers in Week 2 this season, two offenses that made their defenses look bad statistically by putting the opponent in scoring position with regularity, you’re looking at an average drop of 23.1 percent in scoring in Thursday games. If only there was a way to find which defenses were more likely to create turnovers, now that we know that offensive point production is going to drop. 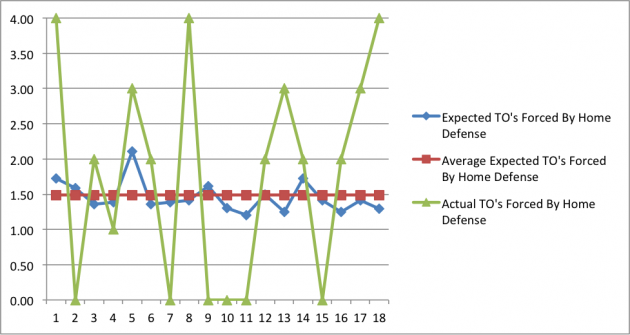 Home defenses created 19.5 percent more turnovers than expected on Thursdays, with over 61 percent of them exceeding statistical expectations. Furthermore, if you assume that home defenses weren’t started when the visitors boasted an elite quarterback (the 2013 versions of Drew Brees, Andrew Luck, and Cam Newton), the percentage of defenses that over-preformed from a turnover prospective on Thursday night jumps to 73.3 percent.

Why do I mention this? Well, starting tomorrow night, you’ve got the Redskins (vs NYG), the Packers (vs MIN), the Patriots (vs NYJ), the Bengals (vs CLE), the Dolphins (vs BUF), and the Raiders (vs KC) that all fit that mold before we get to December. Streaming defenses can be a headache, but not when you have some statistical data that helps you out.

Looking for further Fantasy football input? I’m always happy to help based on your specific situation.

*For this study, I looked at the 18 Thursday games that have been played since the beginning of last year on short rest. The rest factor eliminates the traditional opening day game, as the teams are not forced to perform on short rest, therefore avoiding the whole purpose of this study.