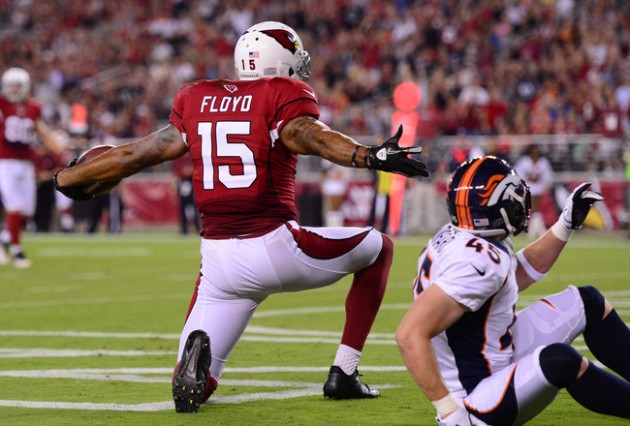 Carrying six WRs, if you can only start four, is useless. Those roster spots are better served for immediate team needs and starting lineup maximization. Subterfuge too; Snidely Whiplash levels of dastardly deeds.

If your opponent doesn’t have a tight end and there’s only one decent option on free agency (Dion Sims this week. Whenever a TE is playing the Jets/Bears), it’s worth cutting Michael Floyd, and the Michael Floyd types of the world, if they’re not a starter, just to block your opponent. STOP THE PRESSES: TE is a lewd, post-apocalyptic night terror. And if the opposition doesn’t own GRONKKKKK, Jimmy Graham, Julius Thomas, Greg Olsen, Martellus Bennett or Delanie Walker (yes, Delanie Walker), then they’ll be scrambling for one of these guys:

At this point in the season, if a player contributes nothing to your starting lineup, that place on the roster is more valuable taking points away from the competition. It’s not guaranteed to work, I mean, Josh Hill CAN score a TD, however swinging the probability in your favor, even marginally, is one of the few ways to actually impact your odds. Having an awesome team is more effective, still, these little things all add up.

This mindset applies across the board. Want to roster three defenses to be prepared for Weeks 14-16? Go for it:

You should be stashing one, maybe two of these RBs. If the starter in front of any member of this group goes down, they’ll earn must-start status in the following weeks because of skill or volume, and for some, both. Latavius Murray and Daniel Herron are fine adds, yet if they’re just warming your bench, lose’em for an upside handcuff. Now, if they’re one of three RBs you rotate based on matchup, that’s different, in that situation, Murray/Herron/Fringy starter, possess more value to you than any of these backups:

Always pick up RBs in the Thursday/Saturday/Monday games as a preemptive attack on a catastrophic injury. If Matt Forte or Demarco Murray’s season meets an untimely end next Thursday night, having Ka’Deem Carey and/or Joseph Randle will prove you truly are an IDEAS MAN!!! If you simply have them on your bench and don’t start them, and nothing happens, waive them for someone else the next day. (NOTE: Check your settings, this does not apply in every league.)

While we’re at it:

The rankings will obviously change with injuries and shifts in usage during the coming weeks, but not significantly. There’s so much random chance in winning a Fantasy football championship, the only thing you can truly control is your preparation. Knowledge leads to calculated risks which places you in best position to get lucky. Trust me, you’ll need luck.

Adding players off free agency then dropping them the next day to put them on waivers, so no one can use them is not against the rules – it’s merely frowned upon. Like a friend soiling your hotel toilet instead of their own.

Drop “name” players. If it’s not one of your elite guys, consider them expendable.

Capitalize on newfound opportunity. Ladell Betts has won me title in the past. Like Mike Anderson did before him. I even Marc Bulger’d my way to a championship one season, and that was well after Bulger was washed up.

Don’t fret over the weather. Unless there’s a record-breaking windstorm. You may want to avoid that. Rain or snow, don’t worry about it. Except kickers. Use dome kickers. I honestly don’t care if that’s actually a thing or not, it’s peace of mind. Next year, banish kickers from your league. It’s the only way Cody Parkey will never hurt you again.

Most importantly, remember, don’t fuck up.