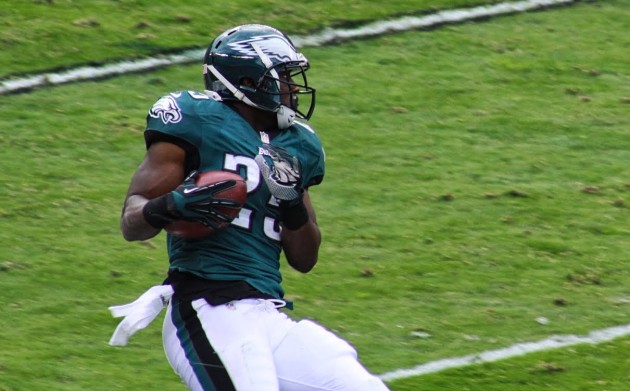 FANTASY FOOTBALL – LeSean McCoy: Thumb is sore, but you can still put two up for the 1st Overall Pick

Fantasy Football owners or hopeful owners received a bit of a scare Thursday night against the Steelers when he left with a thumb injury. But, he is OK and looked better than that piling up 50 yards and a touchdown on six touches before exiting in the first quarter. If you haven’t drafted yet and you do get that first pick don’t let the thumb, the overblown turf toe, Jamaal Charles or Adrian Peterson get in your way from taking Shady rock-a-bye baby.

Charles is worth consideration at the spot, but take away that monster five touchdown, 51 point game and he’s right on par with McCoy in terms of fantasy points last season. Charles has a weaker O-line this year and KC’s weapons are far less talented than those in Philly. JC had his lowest career yards per attempt in 2013 (still an impressive 5.0) and is bound to regress from a ridiculous 19 touchdown season. Charles is the focal point in KC, Shady at least has some help.

Peterson was a beast two years ago (and every other year before that) and was selected number one everywhere last year, but he didn’t finish number one. What makes everyone think he will bounce back to be the best fantasy back this year? 10 touchdowns and 1200 yards seem like a lock for Peterson, plus his schedule isn’t difficult. Norv Turner will find a way to get him a few more grabs, but the question is how long can he go with poor QB play? Peterson has his second fewest career rushing yards, attempts and touchdowns last season. Numbers never lie – that wall is coming for AP.

McCoy was the only player to average 100 plus yards per game in 2013. He finished first in attempts and was fourth in yards per attempt with 5.1, higher than Charles and Peterson. McCoy was also ahead of his potential number 1 overall counterparts with carries over 20 plus yards. Shady had nine of them which was the second highest total in the NFL. Further, he gets the Cowboys twice which he owns and knows it having put up 695 rushing yards and two touchdowns on 134 carries and 24 catches for 144 yards and a score. That in eight regular season games. Not to mention he will see the Giants and Redskins twice which he has had success against. In fact, with the requisite warning of the severe grain of salt approach needed to assessing strength of schedule before the season, Philadelphia checks in with the 4th easiest for RBs this year.

McCoy played the second-most snaps of any RB last year piling up 366 touches. He had 314 carries for a league leading 1,607 yards, 268 more than runner up Matt Forte. The rest of the Eagles’ running backs combined for 86 carries and 12 grabs. McCoy could use the rest to keep him fresh making him even more explosive. Insert Darren Sproles, Chip Kelly’s new toy. I feel the same way a day after the Sproles trade and then sign as I do now – It may actually help McCoy’s Fantasy Football value.

Only 2 NFL running backs have 150 plus catches and eight plus receiving touchdowns since 2011, and now they share a backfield: McCoy and Sproles who will fit in Kelly’s system perfectly. Sproles can do it all; play the slot, split out wide and be a change of pace from McCoy. Sproles will be heavily involved in the offense whether he is touching the rock or not, just ask Shady! Sproles may get 10 touches or so a week, but McCoy will still do the majority of the running.

Sproles has less than 500 career carries through nine seasons, so the majority of his touches will come in the passing game. McCoy caught 52 passes in 2013 for 539 yards and those numbers are most likely going to take a dip, but nothing too significant. McCoy may lose five to ten percent of his carries and no more than 20 percent of his catches, as he should still top 40-45 grabs.

It’s very likely Kelly uses Sproles like he used his running backs at Oregon; as a decoy to take attention away from the main tailback. A back who can play wide receiver or line up in the slot creates matchup nightmares. Kelly had at least two players with more than 90 carries a season in each of his four years as the Ducks coach. It wasn’t until season two at Oregon where Kelly really found his stride, I expect the same thing from him in year two as the Eagles coach.

At the end of the day McCoy is too explosive for his value to drop, he will still get his 300 touches and the Eagles may even put up more points in 2014 with Sproles in the lineup. Add Jeremy Maclin (and subtract DeSean Jackson, in fairness) to the offense and Kelly should find himself with one of the highest scoring teams in the NFL yet again. McCoy will still get the goal-line carries and his big play threat makes him the number one pick for m