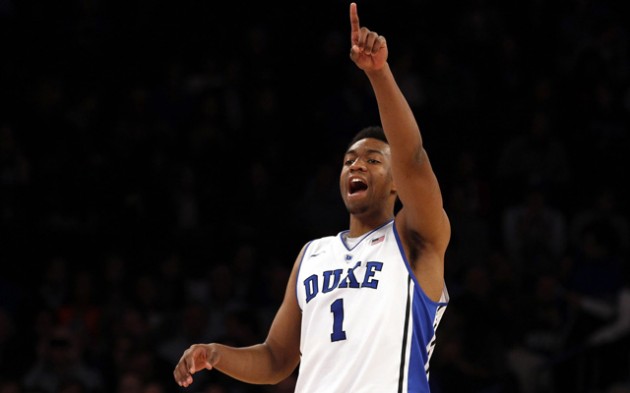 Michael Carter-Williams was last year’s Rookie of the Year becoming the second 76er to win the award behind Allen talkin’ about practice Iverson who won in 1996-97. Rookie of the Year honors could stay in Philly for a second straight year as the 76ers are well represented in these Fantasy Basketball Rookie Rankings. Jabari Parker is my pick to win ROY, but that doesn’t necessarily mean he should be the first player taken off the board come draft day.

Our consensus and overall rankings can be found here.

The 76ers made a long-term investment when they selected Noel sixth overall in the 2013 knowing it would be awhile before they saw their big man on the court. Noel failed to play a game last season because of a torn ACL, but he should get plenty of floor time with nobody around to take his minutes. Noel has more than a few double-double games in him as long as he can stay healthy.

In the preseason finale Noel put up eight points, eight boards, one assist, five steals and five blocks in 30 minutes of work. He should be the 76ers’ top post scorer and top defensive player. Noel should have your attention, just keep in mind he has a ton to learn on both ends of the floor, but he has all the tools to contribute in every Fantasy Basketball category especially in the blocks department. He averaged 4.4 per game in his one season with the Wildcats.

Parker has very little in terms of talent around him, which means he will have plenty of floor time to score points and do all the other things us potential owners love. His field goal percentage was solid in his first and only year in college, but it will likely take a dip from where it was as a Blue Devil.

Parker was one of three freshmen in the last 15 seasons with at least 19 points and eight rebounds per game while shooting 35-percent from beyond the arc. Parker is the most ready-now NBA prospect from last year’s draft and people are going to want to get him early, especially in keeper leagues. I would start thinking about Parker in the fourth and fifth rounds of redraft leagues.

Wiggins was drafted first overall by the Cleveland Cavaliers and then dealt to the Minnesota Timberwolves for Kevin Love just days after the Cavs signed LeBron James. It was a move that was rumored the minute LBJ said he was returning home and became even more clear when King James left Wiggins out of his letter.

Wiggins has dynasty written all over him. Don’t let the poor performance in his last game of the 2014 NCAA tournament fool you. The 6’8 guard seems to shy away at times, but has an explosiveness to him. As he matures he will become one of the better players in the Association. Wiggins was selected first overall so he may be reached on in drafts. My advice: let other owners reach. One thing going for Wiggins is the amount of floor time that will be available to him in Minnesota, more so than he would have had playing in Cleveland.

K.J. McDaniels has been impressive during preseason and has found his way inside the top 5 in the Fantasy Basketball Rookie Rankings. (Photo by Jesse D. Garrabrant/NBAE via Getty Images)

Another 76er pretty high in the Fantasy Basketball Rookie Rankings is K.J. McDaniels who was the first of four picks in the second round of last year’s draft by Philadelphia. There’s an opportunity to get some major minutes because of the lack of depth on the team.

Look at his stat line above and you’ll see there really isn’t much McDaniels can’t do. A big man who can block, pull down boards and hit the three is fine by me! McDaniels has been impressive to start with 14 blocks in his first seven preseason games. He’s also hit from downtown and finished with double digit point totals in a couple games.

Payton is a fantastic player, but his skills will not translate right away in fake basketball. He is a terrific NBA ready defender and will contribute all over the stat board, but his offensive game is weak. It will take some time for Payton to adapt offensively as a point guard .

Turnovers will be a problem in Payton’s first year, much like any other rookie PG, but he will not be short on playing time in Orlando with Jameer Nelson now in Dallas. He projects to finish the season with about 10 points per game to go along with five to six assists. If you are at a point in your draft where you could use a few more dimes, Payton is your guy. If you are looking for boards and points, look elsewhere.

Wicked Smart should have been every headline in Boston the morning after the NBA draft! Smart’s value will depend on what the Celtics do with Rajon Rondo. I think Rondo could help Smart giving him a few easy buckets from time-to-time, but it’s likely Smart becomes a better fantasy option if Rondo gets shipped out of Boston.

Smart can do a bit of everything, and we should see a few games with double digit points to go along with a few boards and assists, while draining the occasional three. Of course, the assists will go up if Rondo goes away. His field goal percentage was weak in college and he’ll need to work on that in the NBA to be a trust worthy fantasy asset. Smart could very well finish inside the top five in steals and he is a terrific rebounder supplying potential owners with three or four categories every night.

My love for Randle grew during March Madness. The big man has the potential for a few double-doubles in his first season and should provide a solid field goal percentage as well. If he can manage to fill the stat sheet with a couple blocks here and there his stock will rise even more.

The Lakers are not the best team, even with Kobe Bryant back, so Randle should get an opportunity to shine. What looked like Randle’s starting job on draft day, may not be once the season tips off as the Lakers signed Carlos Boozer and Jordan Hill, but it shouldn’t take long to see Randle’s upside and it won’t be long until that starting job is his. Be patient with the former Wildcat! You should start to see Randle’s potential in the second half of the season once the Lakers realize that their season is over.

McDermott is a great fit in Chicago! With all the attention Derrick Rose will get (assuming he stays healthy), Pau Gasol and Joakim Noah down low, it should allow the Bulls to stretch out the floor for plenty of three opportunities for Buckets. He is an excellent three point shooter. McDermott can be a great late round pick if your lacking three point shooters.

I’m as excited as anybody to see what Exum is all about. Jazz fans should be excited as well. Exum and Trey Burke could make up a nice backcourt for years to come, but let’s not forget Alec Burks is around too, so there is a bit of a logjam at the moment.

Exum spent last year playing down under and it’s anybody’s guess how he will do against men with the majority of his action coming against the Western Conference, which is no easy task for a rookie. He is very raw, but will be fun and electrifying to watch once he gets going. Exum may have the most upside playing on a weak Utah team with an even weaker bench, but it’s likely Exum doesn’t do much in his first season, but he is a great long-term investment. Exum is aggressive and can get to the rim, just watch!

If you watched Stauskas these past two years, you know he’s a snipe shooter. Maybe even the best in the draft with respect to McDermott. The Kings selected him a bit earlier than I thought he would go, considering he is mostly a spot-up shooter, but he can really shoot. Stauskas will be a great source for threes on a team that could use them, but will finished with 10 points or fewer on most nights. Rudy Gay and DeMarcus Cousins will take the majority of shots in Sacramento.

Gordon was last year’s Pac-12 Freshman of the Year. He is a terrific defender and the Magic are one of those teams who don’t have a lot of talent. With that said, their frontcourt seems packed at the moment with Tobias Harris, Maurice Harkless and Andrew Nicholson standing in the way.

The good news for Gordon is that it looks like Channing Frye will miss the beginning of the season. Gordon will be able to contribute boards and steals to your fantasy squad, but he’ll have to work on his mid-range jump shot. He has more value in dynasty leagues as opposed to a redraft leagues.

I see a lot of Serge Ibaka in Vonleh. He will have to step up the blocks per game to come near Ibaka, but he has the frame and potential to do just that with double-double potential as well. We might not see it from him in his first year, but over time he should turn into a nice big man with a solid field goal percentage. Right now he doesn’t seem to be in the Hornets plans, but an injury will open up the door for him. He will make a big impact in the future on a team heading in the right direction.

Turns out the 76ers rolled the dice at the draft yet again and took a big man who may not even play in his first season. Embiid is expected to  miss all of this season as he recovers from foot surgery. Last year’s first round pick Nerlens Noel fell in the draft too and ended up missing the entire season with his injury. Noel is back, but fans will have to wait to see this dynamic duo work their magic down low.

The 76ers are building something special, the pieces are forming and the stars are in align for yet another top pick in 2015. Hard to even consider drafting Embiid unless you are in keeper/dynasty leagues. If Embiid was healthy, he’d be my number one Fantasy Basketball pick and he might have been the Cavs number 1 pick as well. Boards, points, blocks and a wicked FG% is what we will see from Embiid when he’s healthy.