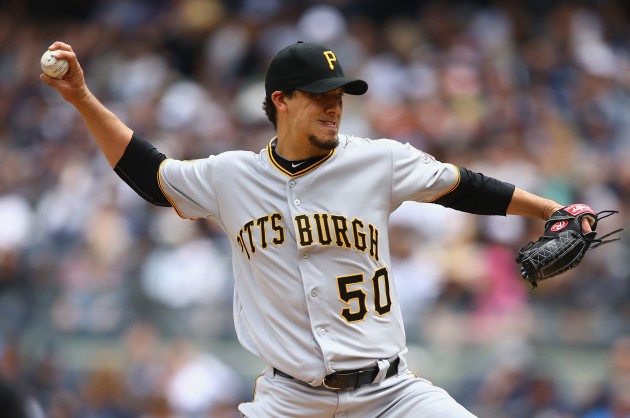 I’ve never been one to brag. In fact, several very important people have told me I’m probably the most modest person on the entire planet, but that’s not pertinent. Still, I am going to point out that Josh Beckett, he of 2014’s first no-hitter, was my number one streaming choice for last Sunday. I do this not to gloat, but to warn – Beckett’s not actually that good. We’re all aware that as he’s aged, the velocity in his fastball has dropped, but surprisingly strikeouts aren’t the issue with the veteran. Actually, if he can maintain his 8.41 whiffs per nine, it would be his highest rate across a full season since 2009. Normally an above average K/9, as Beckett has possessed consistently, would give a reasonable justification for a bloated strand rate, however the former Marlin has a career mark of just 72.1%, almost perfectly in line with the league average. This makes his current rate of 85.4% even harder to explain, let alone place faith in. That number will regress to the mean, as will a 16.4% line drive rate, over 3% lower than his career average, which will bring with it a .211 BABIP that is the third lowest in all of baseball. Is a pitcher with the potential for elite strikeouts on a top-flight National League team worth owning in a standard format? I’d be dumb to argue. But I’ll guarantee that Beckett is far more valuable in spot duty, in stream duty, than he’ll ever be taking up full residence in your lineup. It’s not like he’s throwing another no-hitter this season. …Which he did after I told you all to stream him. Did I mention that already?

Records can be misleading – there’s a reason why wins are a team stat and should really have no business in the assessment of an individual player, but I digress. It’s hard to say that Charlie Morton was being undervalued due to his 0-6 start, simply because it would imply that Morton was being valued at all, but there’s something there. After finally picking up his first win last Friday against the Nationals, Morton gets another premiere stream opponent in the Mets. Now, again, there is a lot in his stats to suggest that the righty is being supremely ignored due to the Pirates overall struggles, however let’s not get carried away. His 67.7% strand rate at first glance would usually scream normalization, but in reality it’s identical to his career mark. A 3.29 ERA seems inviting, but Morton’s 4.20 xFIP is probably more telling considering he’s allowing just 0.43 home runs per nine – even though he’s historically excelled in that regard, surrendering just 0.70 HR/9 across 652.1 big league innings. Still, facing a team in the with a 22.2% strikeout rate and the third lowest ISO in baseball is enough to make me like Morton this week, who also hasn’t given up more than three earned runs in five of his past six starts. Give Morton a look. I guarantee he’s available on your waiver wire.

Like most pitchers, for Tim Stauffer it all comes down to strikeouts and walks, and, in this case, which set of numbers you want to believe in. Stauffer made his first start of the season Friday against the Cubs, allowing no runs and just two hits over five scoreless innings. However the Padre is by no means new to being a major league starting pitcher having made 31 starts back in 2011. That season Stauffer struck out 6.20 batters per nine innings. This season, that number has jumped to 8.75 in an, albeit small, 23.2 frame sample size – though he also averaged around eight per nine during an eight start stretch in AAA last year. Really, it’s the free passes that are more concerning. With a 10.4% walk rate, Stauffer consistently places himself in difficult situations, which at some point, he won’t be able to slink his way out of. In other words, his 87.4% pipe dream of a strand rate will be falling soon. However the Diamondbacks rank dead last in BB% with a dismal 6.2%. If Stauffer can get the assistance of the free-swinging Arizona bats and continue to keep the ball in the park, he’s allowing under a home run per nine for his career, he should find success. It’s just a shame the game isn’t at Petco.

Generally speaking, when your walk rate and strikeout rate are within 2% of each other – that’s a very bad thing, but I still kind of like Nick Martinez on Thursday. The biggest issue so far this season for the rookie has been the free passes. Martinez has surrendered 4.01 per nine through 33.2 MLB innings in 2014, not to mention the seven he had already given up over two starts in AA before getting the call. Now, the righty was never considered to be a control pitcher by any stretch of the imagination, however these numbers are inflated and will normalize, a trend that’s already begun across his last 21 innings. Blame nerves or better yet, something tangible like the opponents, the Rays and Athletics both rank in the Top 5 in BB%, but Martinez couldn’t find the zone over his first 12.2 innings, walking nine batters. He’s issued just six walks since. The strikeout numbers are primed to improve as well. Martinez has set down only 4.81 hitters per nine this year, nowhere close to the numbers he had been putting up in the minors. That’ll happen when opponents are making contact with 94.7% of your pitches inside the strike zone, which would be the second highest rate in baseball had Martinez the innings to qualify. Also, surprise, the Twins offense regressed in May. Finally.

It’s very rare that I’d rather a game with streaming purposes not be played in Petco if given the chance. It’s about as rare as me suggesting that John Danks has any fantasy value, so I guess it’s fitting that the two are intertwined. The veteran will take on the Padres in Chicago on Friday, his first start since holding the Yankees scoreless across eight innings last weekend. If there’s a positive thing I can say about Danks’ current 4.90 ERA it’s that he’s earned it legitimately – his .281 BABIP, 70.3% strand rate, and 9.5% HR/FB ratio are basically league average if only slightly below and the 1.76 BB/9 that the lefty posted last season has proven to be the anomaly that most assumed. However, as mentioned, the game will be played at U.S. Cellular where, somewhat inexplicably, Danks has thrived in 2014. He has posted a 3.13 ERA in five home starts, going at least six innings in four of them – this compared to a 6.83 ERA on the road. It’s hard to have faith in Danks, but it’s even harder to foresee the Padres offense scoring runs without Seth Smith, who has just 20 plate appearances against left-handed pitching this season, not in the lineup. Don’t let me down, John.

Here’s how bad the Royals offense has been over the past two weeks – not only have they accumulated a disgusting isolated power of just .073, but they’re also not getting all that unlucky. With a 13.5% strikeout rate, Kansas City has whiffed far less than any team over the last 14 days, while also possessing one of baseball’s lower walk rates, meaning they are putting the ball in play more consistently than any team, generally the sign of a good offense. Not to mention they’ve stolen most bases, 15, over that span. So it must be a terrible BABIP, right? Not so much. The Royals have posted a league average mark of .280 and still, STILL can not score runs. Is J.A. Happ deserving of his 4-1 record or any sort of real relevance? No. But he did shut down the red-hot Athletics Sunday with seven scoreless innings and has the potential for elite strikeouts, having posted a 8.19 K/9 across 29.2 innings this season. Happ is definitely a risky play, but in deeper leagues he, or more specifically, the Royals ineptness can’t be ignored.