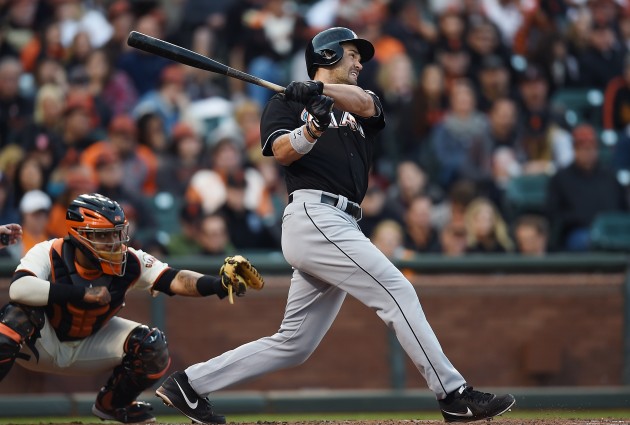 In terms of power, Gattis certainly provides the highest upside. His 23% K-rate is furiously frustrating but a .279 ISO from the catcher position helps to make up for it. He only gets on-base at a .295 clip (.292 career average), and his .250 BABIP is right around the career mark as well. With 10 homers already this year he’s put aside concern about the knee issues that arose late in the offseason. His LD% of 10.2 is low, but a 0.83 GB/FB ratio instills a little more confidence. In the Braves order, he’ll provide some production along with the homers, and seems like the best play out of these three at the catcher position.

Since a 4-4 day against the Phillies on May 18th, Mesoraco has just two hits, and just two homers since April 15th. It’s safe to say the whole Reds’ offense suffers with Joey Votto on the DL, but Mesoraco has found himself fighting for playing time with Brayan Pena a little more often than Fantasy Baseball owners would like. Although he does have a nice 27.9 LD%, his .429 BABIP continues to crash, and until he beats out Pena once and for all, and Votto returns, there’s not much worth owning here.

Mauer’s BABIP and BB% are right on their career averages, but his AVG is down, and his K% is up (a lot). He also has the same amount of home runs as stolen bases…with 2. He’ll hold his most value in OBP leagues, but with the Twins again looking miserable beyond Brian Dozier, Mauer isn’t the same player in fantasy as he is in real life.

Despite striking out 25% of the time, Jones has a respectable 10% BB-rate and has been benefiting from a .333 BABIP. Normally hitting fifth behind a surprisingly productive top half of the Marlins order, he’s accumulated 26 R and 25 RBI to go with his 8 HR in 48 GP this year. Just 46% owned in Y! leagues, though that number has quickly risen 10% in the past week  as a result of the Prince Fielder injury, if you still need a replacement for your highest drafted 1B, Jones is the best bet.

One’s injured for the year. One’s in Triple-A Rochester. One strikes out a lot and is fighting for playing time. Nothing to see here.

V-Mart’s BABIP is actually below career norms, and his K-rate is a beautiful 6.6%. Unlike Prince Fielder, he’s been benefiting from hitting behind Miguel Cabrera. The numbers look sustainable, but if you just can’t trust him, you’ll certainly be selling high.

Since being re-called by the Cardinals, Wong has stolen four bases, and has hits in every game since May 16th, including four multi-hit games. While he still hasn’t hit a home run in a Major League park in 2014, the speed is a suitable alternative (7 SB, 1 CS). His BABIP is believable and although his ISO and SLG are best ignored, the highly touted prospect finally seems to be coming through for St. Louis.

Unless you’re desperate for a MI, there’s no reason to be scooping up/hanging onto any of these three. Boni’s regression is already in full swing, and an 11/4 SB/CS ratio isn’t too appealing.

For the others, no power, no steals, poor averages.

Kipnis is likely to return to the Indians lineup on Wednesday vs. the White Sox so now’s the time to trade for him if you’re so inclined. You may be wise to sell Rendon with the impending return of 3B Ryan Zimmerman as he may see a (slight) reduction in playing time.

With a move to 3B in his near future, Bogaerts is starting to get it together. Still, Frazier is the one to target. Without Votto, he’s been the most dangerous player in the Reds’ batting order. He strikes out just under 20%, but has a nice 0.96 GB/FB ratio with a solid 19.7 LD%. He’s getting on base, and has a much improved .218 ISO. With nine homers and four steals he can give you production across the board, and will benefit from Votto’s return (whenever that may be).

Unless in a keeper league, no need to hang onto anyone here. Be ready to snag Arenado whenever he does come off the DL.

Machado is striking out over twice as often as he did last season, but his BABIP is 80 points lower. He’s also hitting twice as many ground balls as fly balls, which is the worst sign of the bunch. You may be best off selling high to anyone still in awe of last season.

Turner entered Monday’s action riding an impressive hot-streak. He had two homers in his last three games, and 10 hits in 13 games since May 11th. With Hanley Ramirez‘ health in question once again, and Juan Uribe also on the DL, Turner is likely to receive a bundle of playing time. It wouldn’t hurt to try and ride the streak.

Based on name Cabrera and Simmons will remain tempting all season long. Their play thus far however, has not showed any signs of fantasy relevance.

With three steals on Sunday, and a lead-off bunt single for the Jays on Monday, it appears Reyes’ speed is fully back and he wants to use it. If you can’t trust his injuries, sell high, but he looks good to go.

As stated twice above, the entire Reds’ roster suffers without Joey Votto. Probably none more so than Bruce. He’s off to a slow start since being activated, and without his most talented teammate, will likely continue to suffer. Sell.

All three are viable options right now. Beckett might be the worst of the three, but is on the best team and wins matter in Fantasy Baseball, so go with him.

FYI the Toronto Blue Jays offense is pretty good right now. Don’t blame Pomeranz for a bad outing against them, he’s still worth owning. As are the other two, really.

Even though he’s dating Kate Upton again, Verlander’s decline seems to be real. Trade him if you can get value based on name, if not then hope for the best.

Britton and Mejia have looked great in their time as closers. Their jobs are likely a little safer than Doolittle’s as well, with the 10 million dollar man behind him in Jim Johnson.

For three to get on the closer carousel, three have to get off…

If you’re a Chapman owner, I’m sorry. Wait for him to get off the DL, then his team decides to turn up the suck…