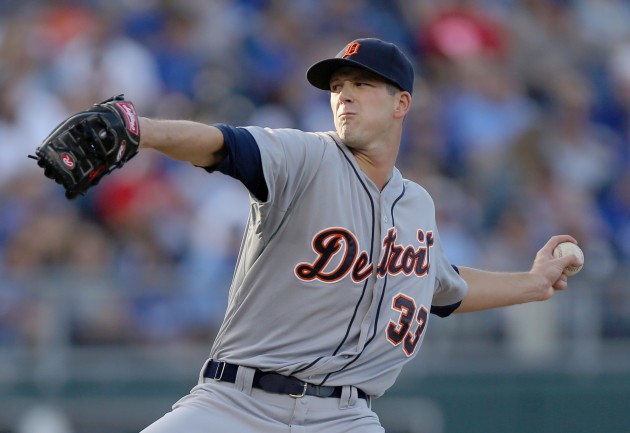 Last week one of baseball’s top pitching prospects arrived to the show and the Fantasy Baseball community rushed to the waiver wire. Andrew Heaney – 47 percent owned in Y! – fared well enough in his first major league start against the Mets, giving up a solo home run over six innings. Well, hope you are ready kid, because you get the ball twice in Week 13 of the Fantasy Baseball season and so many are counting on ya!

Gavin Floyd fractured his elbow and is likely out for the remainder of the season, which means Alex Wood will rejoin the Braves rotation. He won’t get two starts this week as his first outing will come Wednesday, but he too is a must own. Good on ya if you hung on to him, I dropped him in two of three, it was a tough thing to do. I really like Wood the rest of the way.

Week 13 of the Fantasy Baseball season is not the best week for streaming Two-Start Pitchers as most below are either owned or not worth owning. Sometimes the best moves are to not make any, but you have to be on top of you game. Follow the trends. Pat Mayo and Garion Thorne have a couple Two Start Pitchers worth streaming for Week 13. Plus, Mayo presents a fantastic graphic that tells us exactly where Jeff Locke  ranks for the rest of the season.

Week 13 Two Start Pitchers – No doubt about it:

The potential is usually there for these two, I’m just not as confident in them as I normally am. A start each in Colorado and then in Los Angeles against the Dodgers. Miller has allowed at least four runs in four of his last six starts. He gave up seven hits and four runs against the Phillies last week. Yikes! Lynn has been the better of the two Cardinals, but even he has had a few rocky starts over the past two months.

After a shaky April and May, it seems Smyly has finally started to get himself into a bit of a starting pitcher groove. There’s a phasing in period when one heads from the bullpen to the rotation and now we are starting to see what Smyly can do as a member of the Tigers’ starting staff. I don’t love Smyly, I’ve yet to buy in, but he is worth a look and should be owned in more than the current 25 percent (in Y! leagues). It seems that the Fantasy Baseball community is on the fence as well.

June has been good for Smyly with three quality starts – four earned runs over 19 innings. BUT, his strand rate is a tad high at 82.2 percent, I don’t care for a fly ball rate of 42 percent and his 4.35 FIP suggests his ERA is a bit prettier than it should be. It’s like you’re looking at it after a few too many Buds! With that said, it’s a small sample size. Let’s see him pitch some more before making a major commitment. Smyly’s start against Texas is worth the pick up. Houston can hit the long ball (seems weird to write that) but it’s true, so that will be a good test for Smyly.

FanGraphs tells us that Gibson cashes in with the second highest chase rate (40.5 percent) of any qualifying starter over the past 30 days. Zack Greinke is the one who really cashes in, but it’s Gibson that is catching our attention. Over his last 45 innings he’s walked seven batters while allowing a mere single run over his last three starts – a span of 21 innings. He has scoreless outings in four of his last five showings. All of it, sounds amazing!

Problem is, Gibson gets the jitters on the road! He has a 4.93 ERA over eight starts on the road compared to 1.54 over six starts at home. He has allowed at least four runs in three of his last five road starts. He showed flashes in his last start, maybe his best of the season. He surrendered just one hit over seven scoreless innings, striking out eight. At Fenway too!  His numbers of late make it hard not to want to pick up a pitcher who is owned in only 10 percent of Y!. Over his last 30 days, Gibson has a 2.13 ERA, 0.82 WHIP, but so-so 5.92 K/9. Don’t count on the strikeouts and don’t count on this recent stretch to continue much longer. His start in L.A. could very well bring him back down to earth, his outing in Texas may just be similar to his last three. Keep close watch!

Jeff Locke is the definition of risky business! There are those who don’t mind him and others who flat out can’t stand him. As seen above, we have mixed feelings about Locke, but I don’t mind him one bit, especially in Week 13. Locke has 19 Ks over his 26.1 innings this season, but what stands out the most are his two walks. These current ratios are far different from what we’re used to seeing from the lefty. Last season he had a 3.96 BB/9. When Locke was a prospect, he had a consistent K/9 of 8 plus and a real nice BB/9 ratio. That all changed from AAA on. Locke rocks a career 3.95 BB/9.

However, I streamed Locke against the Marlins and he fanned seven over eight innings, while giving up only two runs. I risked it again by keeping him in the lineup against the Reds and he allowed only two runs over six innings. The K’s weren’t there, but again, another quality start. We can’t expect Locke to keep spinning quality starts, in fact, we can count on him to implode over time most likely. Much like his second half of 2013, but not this week against the Rays and Mets. To say those two teams are light hitters, would be an understatement. Consider him a lock this week. Sorry, I had too. He is owned in fewer than 10 percent of Y! The opportunity to risk it is there.