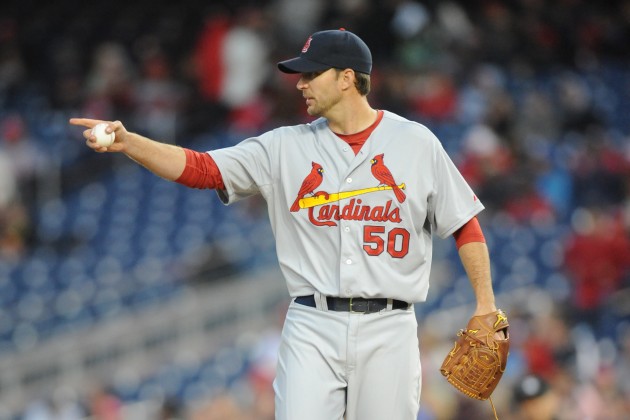 Garion Thorne catches Pat Mayo up on the MLB offseason movement and news one the mound and reveals his 2015 SP Rankings. Plus, the guys debate the best method to draft closers…

Here’s something that might shock you about Adam Wainwright: the man’s 33 years old. It’s a little strange to think about in this current generation of super prospects, phenoms making their major league debuts in their teenage years, but Wainwright, drafted in 2000, didn’t pitch his first MLB inning until 2005 and hadn’t even started a game before 2007. Now, one could argue that this might indicate a lack of stress on the veteran’s arm, but the underlying stats of 2014 beg to differ. While, on the surface, Wainwright’s 2.38 ERA was the best of his career, there are many indications, specifically his K/9, that the Cardinal might be developing slight dead arm. Since 2012 Wainwright has pitched 733.1 innings including 66 postseason frames – that’s an average of 244 innings per season since the righty simultaneously returned from Tommy John and turned 30. This hasn’t noticeably impacted Wainwright’s velocity, it still hovers in the low-90’s on his four-seam, but his 7.10 strikeouts per nine last year were his lowest since 2008 – not that the former first rounder was ever really a dominant strikeout artist anyway. Wainwright’s only been a viable source of strikeouts through attrition; never having produced a rate of a strikeout per inning. Pitching 200 frames was really the only way to maintain even his slightly sub-elite status. Yet it’s not just that the strikeout numbers aren’t there, it’s that he’s never even had a true strikeout pitch. According to Brooks Baseball, Wainwright hasn’t had a pitch with a 20% whiff rate in his entire career. In fact, aside from a relatively average 17.2% rate on his curve last season, the only other pitch Wainwright had that registered a double-digit whiff rate was his cutter at a very modest 10.6%. Obviously, strikeouts aren’t everything, however, when pitching home games at Busch Stadium, which ranked as the fourth overall offensive ballpark in 2014 according to ESPN Park Factors, limiting contact could be a key to Wainwright’s 2015 – especially considering there’s no way he’ll be as lucky as he was this past season.

It’s pretty easy to see how fortunate Adam Wainwright was in 2014 when it came to opponent contact. Even after allowing a career-worst 23.9% line drive rate, the Cardinal was rewarded with career-low figures in overall BABIP (.267), right-handed hitter BABIP (.235), and HR/FB ratio (5.3%) – the latter representing the third lowest rate in all of baseball. The schedule also broke incredibly well for the veteran. Wainwright’s 1.72 road ERA was the best in the league last season, not shocking for, again, a pitcher’s whose home ballpark is known to sway towards the offensive end of the spectrum, but his home ERA of 3.27 was far less inspiring. So, the fact that Wainwright drew 18 of his 32 starts away from Busch and, because of that, was able to pitch 130.2 of his 227 innings on the road, was quite beneficial. Wainwright’s track record and standing on a National League power will keep him within my Top 15, but with so much value to be mined at the middle tier of the position, the veteran right-hander won’t be populating many, if any, of my teams in 2015.