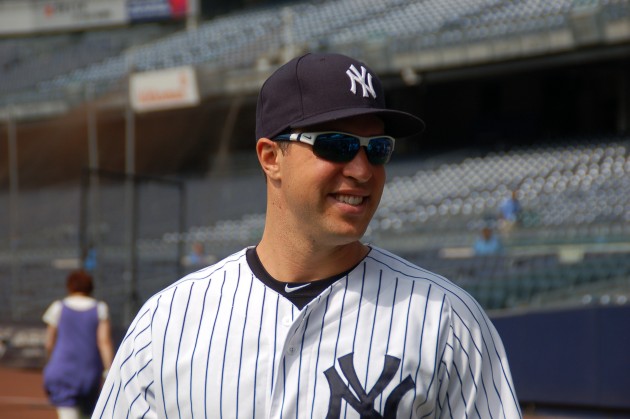 Its kind surprising to see a guy who sits ninth in baseball in home runs and at the top of the American League in isolated power be the second most dropped player on Yahoo Wednesday morning – as Mark Teixeira was, but injuries and September baseball are a complex equation. With roster expansion on the 1st, the Yankees won’t have to place Teixeira on the disabled list even after news broke Tuesday that a MRI of the veteran’s shin revealed more bad than good and he’d be on crutches the next few days. Obviously, an injured, but non-DL eligible Tex hamstrings owners at this time of year, so I won’t blame you for the drop – however, this does open up a unique opportunity for those already clinched, especially those with a first round bye. With no reason to play the next few weeks, you can stash a Top 50 player in standard leagues this season on your bench at little cost if Teixeira become available. It’s a no risk, high reward strategy that could play huge dividends with New York in the thick of a pennant race.

Someone hitting like Teixeira, at least the past two weeks, has been Eduardo Escobar, though to say this is an aberration would be an understatement. Escobar was Yahoo’s most picked up player Wednesday with over 5,000 adds and while the positional flexibility would generally be enough to explain this – the Twin’s line since August 18th is hilariously insane. Entering play on the 2nd, Escobar is batting .391 over 46 at bats, but 12 (TWELVE!?) of the hits are of the extra base variety putting the utility man’s isolated power over that span at a whopping .696. To put that in perspective, Edwin Encarancion, who posted a 265 wRC+ in August, only managed a .512 ISO. Now, Escobar is a switch-hitter above all else so everyday playing time seems like a lock, but he has struggled over the course of his career against right-handed pitching. Not ideal. It’s very likely you’ve missed the gold rush with the 26 year-old.

Finally, Travis d’Arnaud was ESPN’s most added catcher the past seven days with his ownership rising over 11%, begging the question: Why wasn’t this guy already rostered? Yes, d’Arnaud has spent two different stints on the DL this season and, in a 12 man league, only 12 catchers should be owned, but when he has been healthy – few have been better. In fact, among those at the position with 150 plate appearances this season, only super rookie Kyle Schwarber trumps the Met in wOBA and ISO. Toss in the fact that d’Arnaud generally bats clean up in a New York lineup that trails only the Jays in runs scored since the All-Star break and there’s little argument about the backstop’s value.