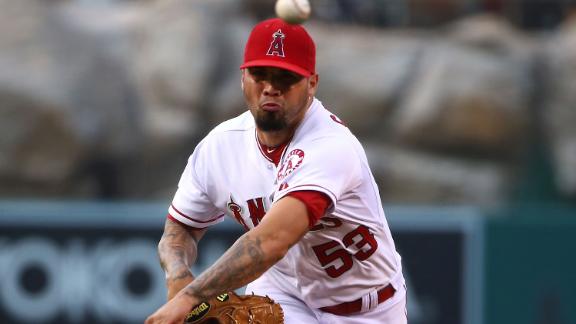 Sometimes a player can get off to a bad start and their ERA makes them look worse than they probably are.  Other times a player can get off to a hot start and while the ERA says they are pitching well, the underlying metrics say something else.  This is one of the reasons I love xFIP when evaluating pitchers.  xFIP estimates what a pitcher should be doing based upon the raw numbers as opposed to what their surface stats show.  It gives you an idea if a pitcher has been plagued by bad luck and due to rebound or serve as a warning that they have been lucky so far and are doomed to regress. I’m a negative person by nature so today I will be looking at pitchers whose ERA’s are much better than they should be (according to their xFIP) and will likely see a huge decline going forward.

Nick Martinez of the Rangers is my first regression candidate.  Currently his ERA stands at 2.65 and I’m sure those of you who picked him up early in the year have enjoyed the numbers thus far.  He has 9 quality starts this year (out of 12) and has allowed 2 earned runs or less in all but one of those 9 starts.  Unfortunately Martinez has an xFIP of 4.81; that is 2.16 higher than his actual ERA.  There is a lot of play between what he has done and what he should be doing.