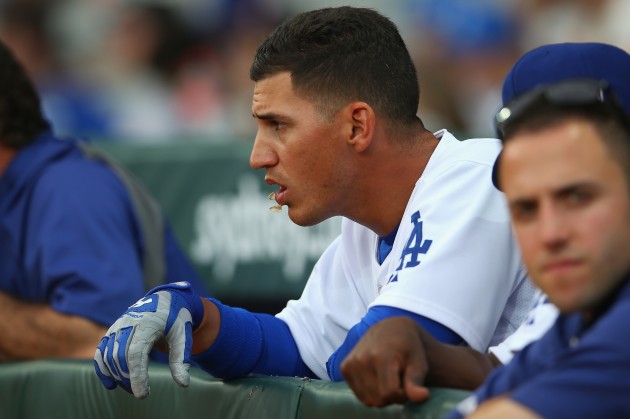 Let’s take a look at last night’s Fantasy Baseball News and Notes and Injuries from around the majors – Twitter style. There were a few really great fantasy baseball lines of the night and no, they do not involve Alex Guerrero. I’ll get to him, but let’s start with Chris Davis. Fantasy owners all over (myself including) have been waiting for something, like this…

OK, not quite like that, but we’ll take it! Davis had only three home runs in 104 at-bats coming in. I guess now, it’s your turn Prince Fielder.

So Chris Davis had as many home runs tonight as Prince Fielder has this season, huh?

Fielder was a late scratch last night with arm weakness. He had missed Saturday and Sunday because of a herniated disc. Edwin Encarnacion owners have certainly forgotten about his slow start to 2014.

#BlueJays Edwin Encarnacion’s 10 home runs since April 24th are the most in all of MLB.

Encarnacion’s third multi-home run game of the month. As for Adam Wainwright? Well, he was at it again last night…

Adam Wainwright allowed a two-out double to Paul Goldschmidt in the fourth inning and… that’s it. First ever one-hit shutout. ERA at 1.85.

With all the great games that Adam Wainwright has pitched, that is arguably the best I have ever seen him pitch. Cy Young worthy. — Dan McLaughlin (@DannyMacTV) May 21, 2014

In my dynasty points league, I own both Julio Teheran and Adam Wainwright. They netted me a combined 190 points tonight.

Julio Teheran tosses his second complete game shutout of the season, as the #Braves blank the #Brewers 5-0

Teheran and Wainwright join Martin Perez, Johnny Cueto and Henderson Alvarez as the only pitchers to have multiple shutouts in 2014.

Catcher John Baker said he texted Hammel on the off-day yesterday and reminded him Tanaka hadn’t lost in 43 starts: “Let’s beat him” — Jesse Rogers (@ESPNChiCubs) May 21, 2014

It’s one thing to say it, but to actually do it…

The Cubs, who entered the day with the worst record in baseball, hand Masahiro Tanaka his first loss since August 2012, 43 starts ago.

Tanaka’s 42 game winning streak comes to an end at the hands of the #Cubbies. #youneverknow — Aaron Boone (@AaronBoone_ESPN) May 21, 2014

Masahiro Tanaka dominated the Cubbies in a start in April. He struck out 10 over eight scoreless innings giving up only two hits. Tanaka had seven strikeouts over six last night, but allowed four runs, three earned on eight hits. Never would have guessed his 34 game winning streak would be snapped against the Cubs. Good on em! Still, Tanaka has been impressive.

#Yankees Masahiro Tanaka has 73 strikeouts & 8 walks, no pitcher ever has struck out more while walking fewer in their first 9 career games.

The A’s won again. Oh, and Sean Doolittle picked up the save. He’s been fantastic by the way.

Last call on Sean Doolittle, who should have been on your team already. He’ll probably get a chance to run with this gig. Yahoo: 32 percent.

Doolittle has been dealin’ too; 14 strikeouts over 7.2 innings and 28 over 21 on the season. He has yet to allow a run in May, a span of 9.1 innings. Get him while he’s hot. Like Pianowski said above, he has a great chance to keep the shutdown role in Oakland. The team is off to a phenomenal start and they play in a lot of close ball games.

#Angels CF Mike Trout left tonight’s get in 5th inning because of tightness in his leg. Scioscia wouldn’t elaborate. — Mike DiGiovanna (@MikeDiGiovanna) May 21, 2014

Mike Trout had a 2-for-3 night going with 3 RBI before being removed for a pinch runner in the bottom of the 5th. This after legging out an infield single. Trout said he didn’t feel it after that play, but that it had been going on for a couple of days and it wasn’t a big deal. Angels manager Mike Scioscia had Trout serve as the DH last night, he could very well be the DH again Friday. Trout and the Angels will get an off day Thurday, but the centerfielder has yet to miss a game. He came into last night’s contest hitting .166 during the month of May, but picked up his first multi-hit game since April 29th.

Trout leads the American League with 56 strikeouts and has the 19th highest strikeout rate at 27.9 percent, up from 19 percent a year ago. He is due for a day off I’d say.

Coco Crisp left the game with soreness in his neck. #Athletics — Oakland Athletics (@Athletics) May 21, 2014

Could mean a DL stint for Coco Crisp who has missed time already with the same neck soreness.

Cliff Lee owners take a hit, but the weirdest news/injury of the day has to come from inside the Dodgers organization…

Miguel Olivo and Alex Guerrero were in a fight in the dugout in the @AbqTopes loss to the Bees today at Smith’s Ballpark. Bees win 7-4. — Tyson Whiting (@TysonKFAN) May 20, 2014

#Dodgers confirm there was altercation between Alex Guerrero and Miguel Olivo during @AbqTopes game today. Colletti: “We’re looking into it” — Bill Plunkett (@billplunkettocr) May 20, 2014

Can’t make this stuff up!

Again, you can’t make this stuff up