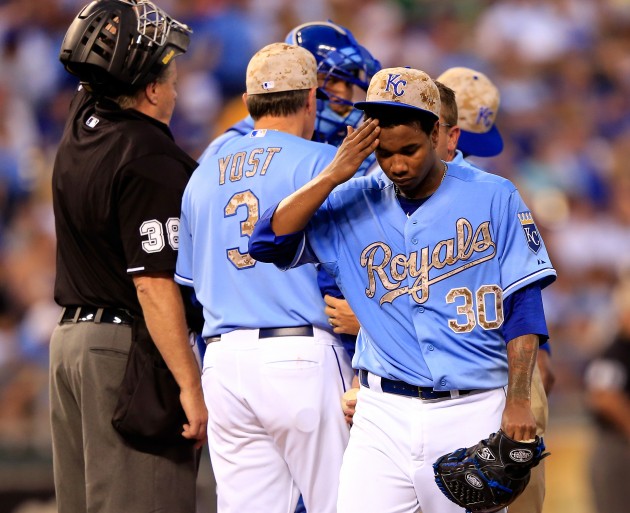 Chris Meaney takes a closer look at last night’s Fantasy Baseball News and Notes from around the majors – Twitter style.

George Springer take us away…

George Springer is good at baseball.

George Springer homered again, now has 8 and an .848 OPS. Those who panicked and released him after 30 ABs really need shame photos made. — Dan Szymborski (@DSzymborski) May 27, 2014

George Springer finished his night by going 4/4 at the plate, came around to score five times, had a homer and cashed in with three RBIs. The Astros rookie is starting to make a name for himself with home runs in four straight games. Let’s not forget he was a hair short of a 40/40 season in the minors. The 24-year-old can play and we’re seeing it now after a slow start to his big league career where he hit .170 in his first 12 games, but he has turned it up now. Springer is fun to watch! Grab him, 67 percent owned in Yahoo! leagues is not high enough. Trade for him, do what you have too! Just go get him.

Since Friday, Giancarlo Stanton has as many 440-foot home runs (3) as the rest of MLB, including this one today pic.twitter.com/nQnhhoSNan — ESPN Stats & Info (@ESPNStatsInfo) May 26, 2014

After Stanton and Springer, Ryan Howard cashed in with the best Fantasy Baseball line of the night while Pablo Sandoval stayed hot.

Sandoval now has four homers over his last six games. Lorenzo Cain, Conor Gillaspie and Khris Davis were perfect with the bats as they each finished 4-for-4 on the night. They combined for only three RBI while Everth Cabrera, David Ortiz and Derek Norris had four RBI each.

I speak for many fantasy players when I say, “About time Everth Cabrera got back on the juice” — Jake (@jbluft) May 27, 2014

A night after Josh Beckett spun a no-no, Hyun-jin Ryu almost one-upped him!

Then there’s this guy… Clay Buchholz.

Clay Buchholz only threw 38% of his pitches in the strike zone, including 19% of 1st pitches — Jeremy Lundblad (@JLundbladESPN) May 26, 2014

Buchholz admitted his mechanics have been different after his shoulder/neck issues of last year. — Nick Cafardo (@nickcafardo) May 26, 2014

That John Farrell said the #RedSox have to discuss whether Buchholz makes his next start suggests he will not.

This last tweet, by Pete Abraham is interesting. So who would get a shot in the Red Sox rotation if Buchholz gets the boot?

Keep an eye on Allen Webster, let’s not get crazy, but keep an eye!

Erik Bedard has given up five straight hits to start this game, is thinking, “I wish I was Clay Buchholz.” — cathalkelly (@cathalkelly) May 26, 2014

A rough go for Erik Bedard as the Blue Jays rolled over the Rays 10-5 for their seventh straight win. Edwin Encarnacion is not going to be happy when the month of May is over.

At last, a win for Jeff Samardzija…

And a loss job for Jose Valverde. We may never see him pitch in the bigs again!

An hour ago the Mets thought Jose Valverde should pitch in a high-leverage situation and close the game. Now they’ve released him. The Mets. — Rob Silver (@RobSilver) May 26, 2014

Certainly a scare for all Yordano Ventura owners. I was up all night thinking about it, not going to lie.

Yordano Ventura‘s fastball was recorded at 91 mph in that final at-bat. — Andy McCullough (@McCulloughStar) May 27, 2014

Ned Yost says Yordano Ventura‘s elbow injury is on the outside of his elbow, not on the inside where the tendon is. Doesn’t seem concerned — Shane Ewing (@ShaneEwing) May 27, 2014

Ventura and the Royals may have dodged a bullet, but you have to think Tommy John could possibly be in his future because of how hard he throws the baseball. I’m all in on Ventura, own him across the board and I’m worried about the possibility of something serious happening to him down the road. Josh Hamilton had a minor setback.