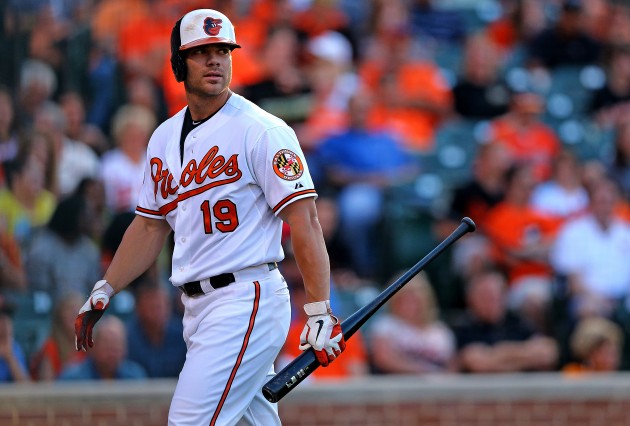 Here we are, eighty or so games into the MLB season, and you drafted the wrong Chris Davis. Well, not really. Technically there’s only one Chris Davis because Khris Davis clearly had cooler parents, but what’s a cold, hard fact is that the latter Davis, fake Chris Davis if you will, has put up better numbers than the All-Star. Khris has more home runs (14), more RBI (42), and a higher ISO (.229) than Chris, not to mention he’s Top 20 in baseball in runs scored. The Brewers’ Davis has been a steady and surprising OF3 in 2014 – great value for a player going around pick 200 in re-draft leagues. Oriole Chris Davis? He was your first rounder – the centerpiece of your fantasy offense. Still, I think we can all agree that we haven’t seen the best of Chris yet this season. All the advanced stats point towards normalization. His .276 BABIP is more than 50 points lower than his career rate; at 13.1%, he’s walking more than at any other point in his professional life; and his line drive rate is an astounding 26%. He’s going to get better, but let’s delve into why he’s been a disappointment so far…

The best indication of a player’s ability to hit home runs is HR/FB ratio which, much like BABIP, can skew outlandishly depending on the skill set of a player. Unlike ISO, the raw result of a player’s power, HR/FB ratios are predictive, so even though Davis’ current mark of 22.4% is well above league average and exactly in line with his career number – just by looking at 2013’s near 30% total we know that he has the capacity for a higher ceiling. Really, the problem for Davis this season hasn’t been the amount of fly balls leaving the park, just the amount of fly balls in general. Sitting at a 39.7% fly ball rate, last year’s home run champion has not only seen a 6% drop from 2013 in his overall figure, but a massive 12% drop in his FB% on specifically off-speed pitches – which he feasted on in 2013, to the tune of a .481 ISO against change-ups. This shouldn’t be shocking. Davis’ ability to hit the ball with power to the opposite field allows him to wait on pitches longer than most sluggers, an approach very conducive with hitting off-speed pitches successfully. However, for whatever reason, he hasn’t produced at nearly the same clip so far this season managing a pitiful – well, in this context – .177 ISO versus the change. Even more troubling considering opposing pitchers are throwing him off-speed offerings 14.8% of the time – the highest rate he’s seen since 2010.

Chris Davis is not a .222 hitter. He’s not going to keep sitting against certain left-handed opponents. He’s not going to keep being this unlucky, discounting of course his somewhat mind-boggling 319ft grand slam last week. If you have the opportunity to buy low on Davis who, after a 10% HR/FB ratio in an injury plagued April, has posted months of 33.3% and 26.1% respectively – do so. 30 long flies is a guarantee and 40 isn’t out of the question. Sure, Khris Davis has had a decent first half, but he isn’t the Davis that can carry a Fantasy team.

So, you might have noticed that Brandon McCarthy is not having the best of seasons. This is evident in several ways, be it his league-leading ten losses or his current 5.38 ERA – good for third highest in all of baseball. But hope is on the horizon, and no, not just in the form of the terrible, terrible San Diego Padres. McCarthy has a case for being possibly the unluckiest pitcher this decade with a .339 BABIP which places fourth highest in the MLB, a 64.7% strand rate good for third lowest in the league, and a 21.7% HR/FB ratio that’s 4-percentage points higher than any other pitcher in the game. Honestly, it’s almost as high a Tim Lincecum. The home run issues are even stranger when you consider that McCarthy’s 55.9% ground ball rate is only bested this season by six other hurlers. Look at Ricky Nolasco. Both he and McCarthy have surrendered 15 long flies on the year, though Nolasco has done so while allowing 112 fly balls to the Diamondback’s mere 69. 69!!! Yes, playing in Arizona does factor in, actually three members of their starting rotation (McCarthy, Wade Miley, and Bronson Arroyo) sit in the Top 15 for HR/FB ratio in 2014, but Saturday’s contest is in Petco against a Padres team that ranks 28th with just 55 home runs. Don’t be fooled by his awful stat line, McCarthy has value, and may soon have more depending on if and where he’s traded. At this point the only downside to leaving Arizona would be playing San Diego less.

Sometimes the most obvious solution is the correct one. After struggling for much of April and early May, the simple thought process on the issues of Drew Smyly was a lack of consistency. The control was sporadic. He was allowing too many home runs. He just wasn’t in the flow of the season. However, now that he’s starting every fifth day, he’s been spectacular. In four outings in the month of June, Smyly has pitched to a 1.44 ERA, never surrendering more than two runs in a single game as he’s forced opposing teams into a station-to-station offensive approach. Smyly has allowed only five extra-base hits since the calendar turned, evident in a .261 wOBA, and it’s a trend that appears likely to continue against an Astros club that has an American League worst .084 ISO over the past week. Still, if there is any danger, it’s in Smyly’s dramatic split numbers. As you would expect, the lefty shuts down left-handed bats, who hit just .143 off Smyly for the season, but Houston’s strength is in its right-handed power. The Astros have five different regulars with wOBAs above .320 versus lefties, a scary proposition for a pitcher who’s allowed RHH to slug .482 off him in 73.1 innings this season. The strikeout potential and floundering offense are too much to ignore, but don’t get caught assuming Smyly is a can’t miss stream option this weekend. He’s not. That said, I’ll still be starting him!

After a torrid start to 2014, Jake Peavy cooled off. Then he remained cool. Now he’s generally unowned. At first glance it may still seem surprising to see a name of Peavy’s notoriety on the waiver wire, but long gone are the days of dominance from the former Padre ace. The strikeouts, which during a four year stretch from 2004 to 2007 sat above nine per nine innings, have dropped to a career-low 6.75, while both the walks and home runs per nine figures are at their highest since 2003. It’s been bleak for Peavy, but that’s not to say he isn’t still useful in the right match-ups – which is where the Cubs come in. Chicago ranks third in baseball with a 23.2% strikeout rate and, if not for Peavy’s old club, would rank dead last in OBP at .293. This is basically a litmus test for the veteran. If he can’t come up with results against a poor offense at Fenway, where his 3.91 ERA is a full two runs lower than an incredibly ballooned road mark, then you can pretty much ignore him for the rest of the season. A 19.3% opponent line drive rate is one of a few outlying stats that suggest hope, but you might even be best to steer clear of most stream options on a weak, semi-slated Monday.

It’s time to admit that Henderson Alvarez is just a good pitcher. He’s not just a must-start at Marlins Park. He’s not just a ratio stabilizer. He’s a legitimate fantasy pitcher who should be owned in all competitive leagues. Is his road ERA almost two runs higher than it is at home? Yes. But that’s not too large an issue when said home ERA is 1.44 – just slightly less impressive than Alvarez’s current 1.05 mark so far in the month of June. With a career 55.1% ground ball rate, Alvarez has been able to overcome his lack of strikeout stuff and instead manage the game, allowing only 1.78 free passes per nine this season and third fewest home runs of any pitcher with over 90 innings thrown. In fact, the Marlin hasn’t surrendered a long ball in 56.1 consecutive frames, the last one coming May 11th to, of all people, Will Venable. Alvarez, much like Jarred Cosart who is also making a start Tuesday, deserves to be a mainstay in someone’s lineup. You’d be inclined to make it yours.