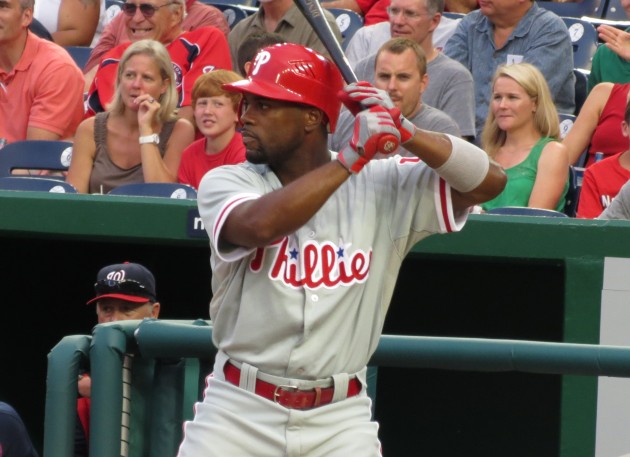 *Recorded December 18th – Rankings have been updated since*

“After the Rollins trade I was once again shocked at how high I had ranked the now 36 year-old shortstop, but, as much as that’s more about the position than the player, the veteran is coming off a fantastic 2014. The former Phillie stole 28 bases last season and has swiped 110 since the beginning of 2011. Really, that’s where Rollins has always mined his value aside from his positionally plus power. Even in his MVP campaign, J-Roll has never batted above .300 and, generally batting out of the lead-off spot, he’s never registered 100 RBI – not overly important when, as previously mentioned, Dodger Stadium’s home run prowess should at least keep Rollins in the 15-20 long ball range. Now, while last season featured a career-high 16.4% strikeout rate, it also was a career-best for the new LA resident in terms of walk rate. Rollins should do enough to overcome a probable .250 average, especially in a lineup that’s looking better and better with seemingly each passing hour.”

I wrote that December 12th, a day after Jimmy Rollins was traded to the Dodgers, the first of several franchise altering moves that Los Angeles’ President of Baseball Operations, Andrew Friedman, would make over the course of the Winter Meetings. Truth be told – I’m still shocked. I keep looking for reasons to send the veteran plummeting down my shortstop rankings, but the situation hasn’t changed: if Rollins can maintain his level of speed and power, he’s still positionally elite. Hell, he’s almost just elite in general. In 2014 only nine men other than the Phillie could flaunt the combination of 15 home runs and 20 stolen bases – Todd Fraizer, Alexei Ramirez, Brian Dozier, Ian Desmond, Carlos Gomez, Jacoby Ellsbury, Charlie Blackmon, Brett Gardner, and Michael Brantley. But let’s break down this already exclusive list. Unlike Rollins’ completely sustainable 9.6% HR/FB ratio, a number very much in line with his, albeit long, career, the latter two players, Gardner and Brantley, were both the recipients of ratios almost twice that of the figures they had previously posted. Even a player like Blackmon, whose .331 home average was 90 points higher than his mark away from the magic elixir that is Coors Field, has recently been rumored to be on the trading block, obviously a dagger to his perceived value. The point is, contrary to the easy narrative, there are concerns aside from age – especially if it’s only affecting subtle areas of Rollins’ game.

It’s not out of the realm of normalcy for a switch-hitter to clearly favor a particular side of the plate in the later stages of his career, whether it’s a result of bat speed or just the widening of an already apparent split gap. For example, Rollins has been relatively consistent from both batter’s boxes – at least in the broad scope of his entire career. The Dodger is a .265 hitter as a righty and has a .267 average as a lefty. Even Rollins’ power has been eerily evenly spread throughout his time in the MLB. The 36 year-old has hit a home run for every 39.1 at bats against right-handed pitching, while he has done so just slightly less often at one per 39.5 at bats when facing a southpaw. Yet this is where his age has begun to show, but in a way conducive to him retaining the most value. Since 2011, in 663 at bats from the right side, Rollins has hit just a single home run for every 60.3 at bats. However, in 1674 at bats as a left-handed batter, Rollins is hitting a long ball once every 32.8 at bats. Now, the loss of power could never be described as a good thing, but, if it’s only manifested itself to a single side of Rollins swing, it’s not the worst thing in the world if the side it left alone was the side in which the shortstop has found himself in 71.9% of his plate appearances the past four seasons. Not to mention the fact it’s barely effected his speed. Using that same time parameter of 2011-14, Rollins’ aged 32 to 35 seasons, the former second round draft pick has stolen 110 bases in 135 attempts – an 81.5% success rate. Last season specifically was no different, with Rollins swiping 28 in 34 tries (82.4%). With only 14 players managing 25+ steals in 2014, Rollins ability to not only steal bases, but do so at an above average clip bodes incredibly well heading into April.

Essentially it comes down to weighing established numbers against Father Time with Jimmy Rollins. Middle infielders of similar archetype, Barry Larkin or Roberto Alomar, tended to see their speed and stolen base numbers dissipate around the age of 34, while Omar Vizquel was swiping 20+ bags well into his late 30’s. It’s an inexact science, but with people more than ready to write off Rollins after a horrendous 2013, I’m inclined to believe his 2015 lies somewhere in the middle – with his ADP (currently 166 or SS11) not having yet fully recovered. The veteran shortstop is moving to a similar home run park, a far better lineup with the Phillies ranking 28th in wOBA (.295), 25th in average (.242), and 24th in runs (619) last season, and Rollins probably doing so with a return to the lead-off role. Actually, there are aspects of Rollins’ 2014 campaign that might be due for normalization. Even with a lead-off hitter not exactly the beneficiary of many at bats with runners in scoring position, Rollins’ .218 average and .239 BABIP were both career-lows in the situation – not to mention his .681 OPS with RISP was sub .800 for the first time since 2003. Basically, it won’t take much falling in the right way for Rollins to be a Top 10 SS and even less to give a solid return on his ADP. It is shortstop after all.