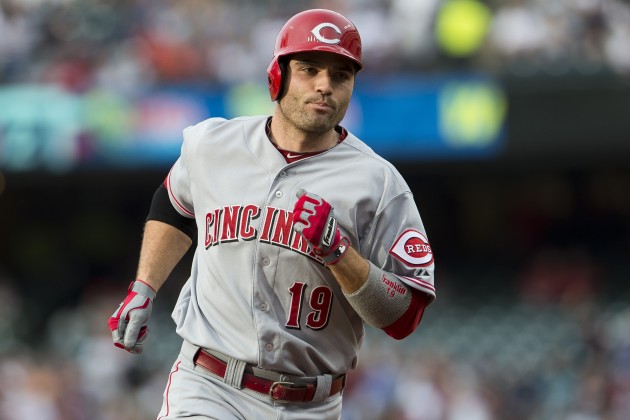 Most Underrated: Here’s my simple plea when it comes to one Joey Votto: hate him because you fear his injury-riddled past; hate him because Clay Davenport has the Reds scoring fewer runs than every American League franchise, hate him because he’s Canadian and he probably won’t hold it against you, just please, please don’t fall back to the “he doesn’t swing enough” narrative – mainly because it’s a stupid argument. Yes, in a vacuum, would it be beneficial for a player to swing more often than less often in terms of fantasy? Of course. But it’s so much more important that said player is just, well, good. Votto had a 40.1% swing rate in his 272 plate appearances last season, almost identical to the 40.3% figure he posted in 2013, and would have sat 12th lowest in all of baseball if he had near the at bats to qualify. Again, not ideal, but nowhere near worthy of the quarantine-like stance we’ve taken to the veteran. Anthony Rendon, everyone’s favorite 2015 break-out star, posted a 41.3% swing rate last year. Jose Bautista, a Top 5 OF in standard leagues in 2014, had a swing rate of 40.5%. In fact, Mike Trout, yes, the reigning MVP and consensus first overall pick, had a 38.8% swing rate – and he’s never posted a number above Votto’s 40.1% in any of his three full MLB seasons. So don’t tell me Votto needs to swing more to succeed. He doesn’t. Really, the only thing crucial to the former second round pick’s value is his HR/FB ratio. As is generally consistent with players who post high averages, Votto hits very few fly balls and he hasn’t had a fly ball rate above 35% since 2009. Fortunately for the lefty he had simultaneously never posted a HR/FB ratio below 15% – until his compressed 2014 where it fell to 10.7%. I’ll bank on history with Votto in this regard. Expect a bounce back in HR/FB. Expect a rebound with a BABIP over 50 points below his career norm. Expect his wOBA to shoot back above .400 – where it had sat for an ungodly five consecutive seasons prior. I’m willing to bet that 2014 was an outlier for Joey Votto and, going as 1B11, I’m really not gambling that much.

Most Overrated: So, if I have any sort of gut rules that I like to adhere to when drafting, even subconsciously, the two biggest would be a fear of paying for playoff production and paying for a projected sophomore break-out. Basically, I don’t need George Clooney to tell me that Kolten Wong is my perfect storm. I’ll admit Wong had a fantastic run in the playoffs in terms of coming up exactly when needed. He had three home runs in 30 at bats – two of them providing the game’s winning run. It’s all great and sepia colored in the minds of Cardinal fans across America’s Mid-West, but no one really remembers that Wong batted just .241, very much in line with his .249 average during the regular season, and paired that underwhelming total with just a single free pass drawn. Now, obviously there’s room to grow with Wong in 2015. He didn’t benefit much from a .275 BABIP throughout his 433 MLB plate appearances in 2014, specifically a .262 BABIP versus right-handed pitching – the main cause for the left-handed Wong’s strange reverse splits (he hit 81 points better against southpaw pitching). Yet, it’s going to take quite the bump in luck to get any return on Wong as he’s currently going off the board as 2B8. Could he go 15/15 in 2015? Sure. It wouldn’t actually be that surprising. But if Wong’s ratios don’t improve immediately, it’s hard to justify taking a player whose value is so tied to the stolen base when said player ranked 181st among those with 400+ plate appearances in OBP (.292) and tied for 171st with Jordy Mercer in wOBA (.299). I’ll ride with Jedd Gyorko 120 picks later, who, by the way, is still just 26. Hell, Brett Lawrie, going in basically the same range, is only eight months older than Wong and possesses the ever overpriced positional flexibility everyone seems to crave. Don’t get lost in the youth of Wong, especially when he’s rostered by such a public team.

Situation to Watch: Speaking of Jordy Mercer, that .299 wOBA was so impressive that the Pirates decided this summer that maybe, just maybe they should find a possible replacement – even if it took a $5 million posting fee. Enter Korean import Jung-ho Kang. Now, Kang is a sample size nightmare because, well, he has no sample, but what we’ve heard is definitely intriguing. In the Korean Baseball Organization in 2014, Kang, in 501 plate appearances, hit 40 home runs, managed a .739 slugging percentage, and culminated it all with a video game-esque 1.198 OPS. Do these feats become less impressive when you consider that former major leaguers Jorge Cantu and Eric Thames also had insane numbers? Sure. But their stats were far more in line with Kang’s Korean career averages (.504 SLG% and .886 OPS) than the 27 year-old’s 2014, which regardless of class, was far and away better. Still, it’s not as though Kang has done anything in Grapefruit League action to ease the unrest around his incredible range of outcomes. He began 2 for 4 in his first two game appearances, taking Marco Estrada deep to right-center in his second “professional” at bat. Since, people have had time to realize Estrada and his 1.73 HR/9 led baseball last season and Kang has gone 0 for 7 – not great. However, at an average pick just inside the Top 300, there’s little risk with Kang and more power upside than is usually, or ever, available outside the Top 30 at middle infield. With Neil Walker a fixture at 2B and Josh Harrison finding a home at 3B, Kang’s only path to PAs is Mercer, but that should exactly strike fear into his heart. If Kang can cement himself in Pittsburgh’s everyday lineup, I don’t see how he doesn’t become a fringe starter at SS in standard leagues.

Value Play: Lost in all the hype around Chicago super prospects Kris Bryant, Javier Baez, and Jorge Solar – Arismendy Alcantera hit home runs and struck out in excess just as well as his peers in a brief, 300 major league plate appearance 2014, posting 10 home runs and a 31% strikeout rate. Ironically, the prospect depth that is keeping the 23 year-old’s ADP within reason is the same thing that’s blocking him from a clear path to at bats. The Cubs have a lot of players that warrant a MLB roster spot and even with Alcantera playing over 200 innings at both 2B and CF last season, there are several obstacles in the way of consistent playing time. Baez and Starlin Castro seem to have the middle infield anchored. Dexter Fowler was brought in through free agency and with Joe Maddon now at the helm, to expect a Chris Coghlan/Chris Denorfia platoon in left field seems to be an intelligent estimation. Yet, Maddon has utilized Swiss army knife players before (Ben Zobrist) and there might not be a better manager in baseball at properly using his roster. It might be extreme to expect 15 home runs from Alcantera even with standard plate appearances, thought that is the figure he put up in 571 PAs in Double-A in 2013, but his 14.7% HR/FB ratio and 51.1% ground ball rate seem to imply we temper our power expectations. However, the switch-hitter did steal 25+ bases in each of his past three seasons when combining totals from various levels, and that speed is more than worth a look with the current price tag of OF60. Alcantera might prove to be a frustrating fantasy commodity, but frustration and passion go hand-in-hand with potential.