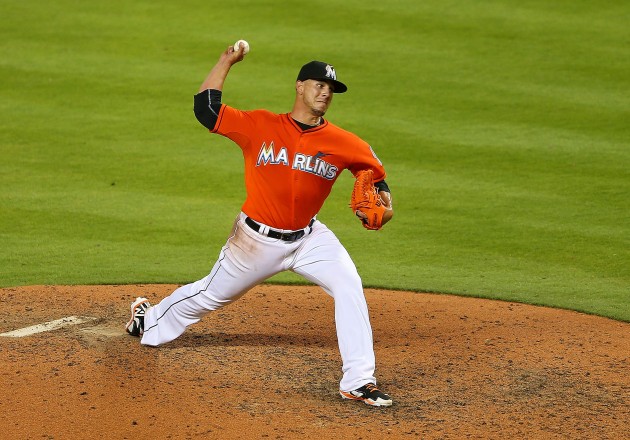 Francisco Liriano picked up where he left off last season…

Liriano has 10Ks over 6 innings. He becomes just the 3rd Buccos LHP to strikeout 10 batters on Opening Day.

Although his 10 Ks came against the Cubs, it’s a great sign for Fantasy Baseball owners that maybe last year’s results are repeatable in 2014. Jeff Samardzija was solid as well allowing only five hits through seven innings. Neil Walker #WalkerOff with a solo bomb in the 10th for the 1-0 win. Emilio Bonifacio finished 4-for-5 at the plate with a stolen base in his Cubbies debut.

Mike Trout on pace for 613 HRs this season.

Felix Hernandez would settle down…

#Mariners ace Felix Hernandez with 11 Ks through 6 IP. Another reminder of why they always say you have to get to the good ones early.

Justin Smoak delivered the blow; a three-run jack in the top of the ninth as the Mariners exploded for six in the inning in the 10-3 win. Hernandez left the game losing, but the Mariners finally gave him a few runs so he gets the W.

Stephen Strasburg was smacked around early by the Mets, but he finished with 10 Ks over six innings.

The three-run shot from Anthony Rendon came in the 10th as the Nats outlasted the Mets 9-7. Rendon finished with four RBI and David Wright had a 3-for-5 day with two RBI and two runs. Rendon was considered a solid Fantasy Baseball sleeper about a month ago, but his stock fell towards the start of the season. If you have him, I think you have yourself a player.

So much for the prefect Spring for Verlander. He walks in a run, his third walk of the inning as the Royals bat around in the 4th scoring 3

To be fair, Justin Verlander would have been out of the inning if it wasn’t for some poor play by Alex Gonzalez.

Alex Gonzalez pretty much looks like a 37-year-old who spent last year as a first baseman trying to masquerade again as a shortstop. Oof. — Jeff Passan (@JeffPassan) March 31, 2014

Gonzalez made up for it with a RBI triple to tie the game in the 7th and a walk off single in the bottom of the 9th.

Standing ovation for Ryan Braun in Milwaukee is about the least surprising thing on Opening Day. Great message. Lie and we love you anyway. — Jeff Passan (@JeffPassan) March 31, 2014

He won’t get as much love when the Brewers hit the road, but a good first game for the former PED user! One hit, one run and a stolen base. Jonathan Lucroy finished 2-4 with a stolen base as well. Yovani Gallardo gave up only four hits in six innings and Francisco Rodriguez picked up the save. I like the Brewers this year.

Oh, baby: Phillies up 6-0 in the second. Tanner Scheppers is still on the mound.

Tanner Scheppers in the rotation…might not say that very long.

Tanner Scheppers was hammered for seven runs on eight hits over four innings as was Cliff Lee, but he had the better result.

Eight runs on 11 hits for Lee with only one strikeout. Alex Rios had three hits, scored three times and added a three-run shot. 10 runs were not enough though, as the Phillies scored the last touchdown for the 14-10 win.

How many runs a game will the Rangers have to score with that pitching staff?

Abreu doubled in his first at-bat and Alejandro De Aza did the rest in a 5-3 White Sox win. It was announced earlier in the day that Matt Lindstrom would be the closer and he picked up the save in his first appearance of 2014. If your closer position is weak go and grab Lindstrom because he wasn’t drafted.

Alejandro is on pace for 324 home runs! Think he can keep it up? At least ride him out in daily leagues. Also, let’s not forget about Chris Sale as he fanned eight in the win.

Grady Sizemore is a great play as well. Owned in 46 percent of Yahoo! leagues. That number should be higher.

Sizemore home run. The Natural is back, and the rich get richer.

Good for Grady Freaking Sizemore. Such an easy story to root for.

Sizemore with the home run in his first game since 2011. Nelson Cruz spoiled the party for the defending champs, hitting the game winning shot in his Orioles debut. His 10th home run in the last 23 games against the Red Sox.

Nothing but gems from Adam Wainwright and David Price as both pitchers picked up wins on Opening Day. If you have them on your Fantasy Baseball team, well lucky you, you’ll get them once more this week.

Billy Hamilton didn’t have a great day. He finished 0-4 striking out four times. Wainwright made him look silly all day, he has that effect on batters. Be patient with Billy, he has a lot to learn at the plate and to be fair, the Reds only had three hits in the 1-0 loss. Yadier Molina had a solo home run, the only hit Johnny Cueto gave up.

Wil Myers and the Rays roughed up R.A. Dickey and the Jays to the tune of 9-2. Myers had three hits and two RBI while Dickey gave up six runs and walked six. It also didn’t take long for Jose Reyes to go down.

Reyes hit the 15-day DL in his first at-bat.

through 4 innings jose fernandez has thrown 8 pitches out of the strike zone. for the non saber guys, thats 2 per inning.

Jose Fernandez tied the Marlins record for strikeouts in an Opening Day game with 9 (Josh Beckett, 2004)

Jose Fernandez gave up a bomb to Carlos Gonzalez and he laughed it off. Probably because he got more than enough run support from Casey McGehee…the Marlins clean-up hitter.

Four RBI for McGehee, don’t count on that every day.

Other Fantasy Baseball News and Notes

Schoop with a single in his first AB.

First closer to blow a save in 2014: Bobby Parnell. Denard Span singles in the tying run, Mets and Nats tied at 5.

It’s almost like Jim Johnson is the third best pitcher in Oakland’s pen. But no… Because saves and stuff. #Clutch

Jim Johnson didn’t blow a save, but in the ninth he gave up two hits and two runs in a third of an inning in a scoreless game. Justin Masterson cruised allowing only three hits over seven innings and Sonny Gray was equal to the task striking out seven over six scoreless innings. Addison Reed didn’t blow a save either, but took the loss when he gave up a two-run big fly to Buster Posey.

Salvador Perez finished 4-for-4 at the plate yesterday and Jimmy Rollins had four RBI on only one hit, a grand slam.

Oh and play this next start…