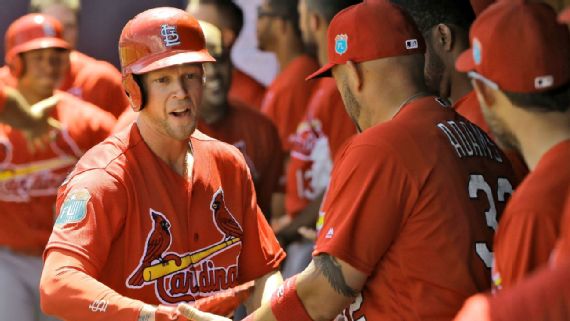 Cardinals racked up 10 runs on 19 hits against the Brewers and they were led by no other, Jeremy Hazelbaker.

I have to say Jeremy Hazelbaker is greatest hitter I’ve seen. Triple, sacrifice fly, single, single, double. He is unstoppable.

Chris Davis was one of 15 guys to hit a home run last night. A couple firsts in 2016 for some; Billy Hamilton, Mark Trumbo, Mike Trout and none maybe bigger than Addison Russell’s.

https://t.co/jagW8ADB2S is an old piece of crap. I’m surprised it’s still standing after that Trout homer smashed into the paper mache walls

Colby Rasmus now has three on the year. He’s 31 percent owned in Y! and he’s hitting in the middle of a powerful lineup.  Davis also picked up this third while Giancarlo Stanton and Mookie Betts hit their second of the season.

Davis and Trumbo combined for eight RBI and the Orioles remain the only perfect team left at 6-0.

You can take Mark Trumbo out of Safeco but you can’t take the Safeco out of Mark Trumbo. — Ben Carsley (@BenCarsley) April 11, 2016

A lot of big strikeout performances last night; Aaron Nola with nine, David Price with eight and Hisashi Iwakuma with seven, but none could put it all together. Michael Wacha had no issues with the Brewers.

The same can’t be said for Steven Matz.

The seven runs allowed by Steven Matz were the most ever in his professional career — majors or minors.