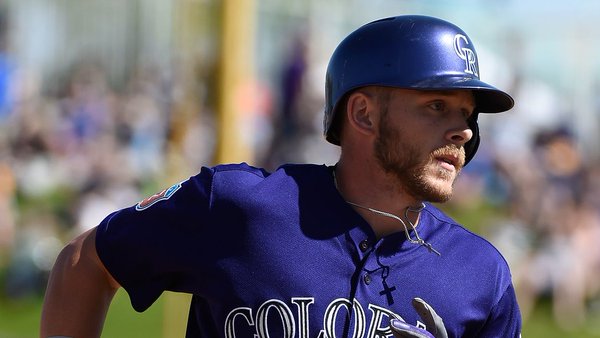 Denard Span was worth the price as he cashed in with five RBI and if you stacked Giants, well then you won!

The Giants entered the season having scored the second most runs during Spring Training and they didn’t miss a beat on Opening Day as they put up a 12 spot in Milwaukee. Matt Duffy also went deep and finished with four RBI. Also, stack against Brewers all season, especially at Miller Park.

Bryce Harper didn’t disappoint those who spent up for him.

Harper makes things fun most days and he did just that homering in his first at-bat. It marked the fourth time in his career in which he’s hit a home run on Opening Day. He’s half way to the record and he’s only 23. Shoutout to Daniel Murphy who homered in his Nats’ debut.

Byung Ho Park wasn’t as successful in his debut, but swing looks good.

Certainly not as nice as a debut as this guy!

I’d like to go back in time three days and select Trevor Story for NL Rookie of the Year. — David Cameron (@DCameronFG) April 5, 2016

Trevor Story became the fifth player in MLB history with two home runs in their debut; first on Opening Day. And both off Zack Greinke! If you’ve seen his work in the field, well then you know he’s legit. Hype is real.

Greinke: 4 IP, 9 H, 7 ER, 3 HR. Those three home runs were the most since allowing three back in 2009. Some people will tell you he’s in for regression. Of course he is! I wouldn’t worry. This says more about the power Colorado has. Nolan Arenado had a three run shot.

Greinke struggled, Jake Arrieta and Clayton Kershaw did not…

Both could have easily pitched complete game shutouts if not for Opening Day or their teams having ridiculous leads. Kershaw gave up a hit an had a hit himself to go along with his nine strikeouts. Oh, and…

Not a hole in that lineup and they have depth. I feel for every opposing arm. Dexter Fowler may score ‘one-fiddy’ this year.

How about the reigning AL MVP you ask?

Donaldson just made it rain in a dome. — Garion Thorne (@GarionThorne) April 5, 2016

Great news for those who took a shot on Anthony Rendon.

Rendon batting 2nd to start the year. Love it. Hope you guys read my Bold Predictions over on @FantasyPros.

He looked good too, had a couple nice rips!       One injury note to take care of and it was a small one…

That wasn’t the case as Jason Grilli came in an blew the save after Arodys Vizcaino pitched a scoreless eighth with two strikeouts.

Mark Trumbo is in a prime spot to succeed yet again in his career and I think he’ll make the most of it. He has serious power and plays inside a hitter friendly division. Trumbo had a great spring, ride out the hot streak.

Zack Cozart finished 3-for-3 with three runs and had an rbi sac fly. Keep an eye on the newly named leadoff man because that position comes with some upside. At least he’ll make for a cheap MLB DFS play.

Baseball will always keep you coming back! It’s a new day, Rich.