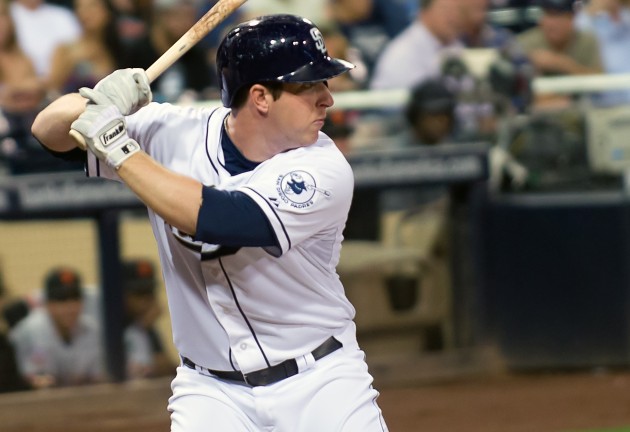 Garion Thorne catches Pat Mayo up on the MLB offseason movement and news revealing his 2015 2B Rankings.

*Recorded December 17th – Rankings have been updated since*

Over the upcoming months you’ll hear a lot about normalization, the belief that when it comes to statistics like BABIP, HR/FB, and line drive rate, aside from a few outlying players, most of the league tends to hover in and around everyone else. Essentially it’s the concept of a bounce-back season, the living justification of the time honored baseball mantra that for every double stolen by a diving catch – there’s a bloop single around the corner. It is under this general pretense that Jedd Gyorko‘s 2015 campaign hangs because, I can say with some certainty, in no way could the first two months of the Padre’s season have gone worse. Dealing with a case of plantar fasciitis that would limit him to just 26 plate appearances in June and July, Gyorko posted a pathetic .162 average across his year’s first 56 games, something that can be heavily attributed to an incredibly unlucky BABIP of just .192. Really, viewing Gyoko’s 2014 in any other way than pre-injury and post-injury is a massive mistake. Seen by most as a J.J. Hardy type middle infielder (immense pop with little to no speed), Gyorko’s home run production was spread evenly last season, even if the 10 long ball output was supremely underwhelming. However, to look at only home runs to distinguish power is a mistake. Gyorko saw his first half .108 ISO rise by 30 points through August and September, benefiting from six more extra-base hits over that span even with eight fewer at bats. Now, this is still not something to necessarily celebrate. Gyorko posted a very promising 23 home runs in 2013, too see him not even half that figure was disappointing. However a more than 5% drop in HR/FB ratio between the two seasons and the fact that Gyorko didn’t register a single long ball off of a breaking pitch, 30% of his homers in 2013 had come in that fashion, would seem to suggest a change in 2015.

Yet for all the signs of improved power, the Padre’s plate discipline was probably the most improved aspect of Gyorko’s game over 2014 final two months. His SOBB (a measure of a player’s walk rate subtracted from his strikeout rate) was 19.9% before hitting the DL after a start in early June, with the second baseman striking out almost five plate appearances for every walk. This figure was a modest 9% in last season’s final 222 PAs, with the strikeout to walk ratio settling around a far more favorable 2:1. This is truly the most intriguing aspect of Gyorko’s game. The 26 year-old walks a very fine line when it comes to pitch selection. In 2014 the former second round pick sat third behind only Chris Carter and Adam Dunn in O-Contact at a mere 48.5%. However, Gyorko is able to keep his overall strikeout rate in the low 20% range, and not the low 30% marks that the aforementioned pair frequent, by simply not swinging nearly as often. Gyorko’s O-Swing was just 26.5%, one of the 30 lowest numbers in baseball, and was actually a 5% decrease from his figure in 2013. In fact, if the Padre can continue to limit his swings on pitches out of the zone, it’s almost beneficial for him to whiff as frequently as he does, as poorer contact is usually mined from said offerings.

Still, for all of Gyorko’s attributes, his value in 2015 might be as simple as San Diego’s improvement as a team because, much like the man himself, the Padres’ lineup in 2014 couldn’t get any worse. Since the turn of the millennium only three teams have even scored fewer than 550 runs in a season: the 2010 Mariners, the 2013 Marlins, and last year’s Padres – truly elite company. San Diego had the lowest team average in baseball at .226 (actually setting a modern era record for the worst average in a month since 1914 with a putrid .171 figure in June), the lowest wOBA at .283, and the worst ISO, this time specific to just the National League, at .115. Regardless of how you feel about Matt Kemp‘s old man hips and the bust potential of Wil Myers, Justin Upton is a legitimate middle of the order threat and should create a better situation for Gyorko overall. I don’t see any reason he won’t be a Top 12 2B in 2015, making him a must start in standard leagues. The potential for another terrible season is there, but with a higher ceiling than Ben Zobrist, Neil Walker, and Daniel Murphy, I’ll take the substantially lower floor and Jedd Gyorko.