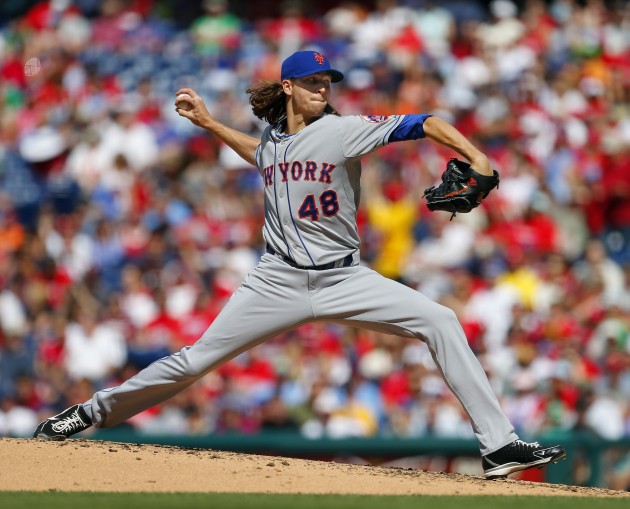 There’s a couple of factors working against the reigning National League Rookie of the Year when it comes to his absence inside my original Top 40 starting pitchers – mainly his current ADP. It’s long been established that people are apt to draft potential and youth, with the unknown generally far more appealing. Yet, as we’ve seen time and time again, whether it be Danny Salazar or Michael Wacha, the sophomore season is always an overpay. That’s not to say there isn’t a lot to like about Jacob deGrom. His 2.69 ERA was 16th best among pitchers with at least 140 innings thrown and his 25.5% strikeout rate was Top 10, but that’s where the real question marks present themselves. Coming from relative obscurity, deGrom, a former ninth round selection, had never registered more than eight strikeouts per nine at any stop in the minors where he pitched for more than 15 innings. Some of this can be attributed to the pathetic NL East, where every team that weren’t deGrom’s Mets sat inside the Top 10 in K%. The two worst offenders, the Braves and Marlins, were opposition for the young righty in seven of his 22 starts in 2014 and deGrom took advantage. In 45 innings against Atlanta and Miami, the 26 year-old struck out 12.6 batters per nine compared to just 7.65 in his other 95.1 frames. Now, as troublesome as this is, deGrom hasn’t changed addresses – he’s still a Met and will still be privy to the benefits (ballpark included). Of greater concern is deGrom’s reliance on his fastball. According to FanGraphs, the rookie’s fourseam was the sixth most valuable fastball in baseball last season accounting for 14.9 runs and placing him in the class of Johnny Cueto, Clayton Kershaw, and Madison Bumgarner – I just don’t think that’s sustainable. Even if it is, unlike those three, deGrom doesn’t have a secondary strikeout pitch to fall back on. Yes, his change-up registered a 19.6% whiff rate, but, in terms of raw whiff counts, deGrom’s fastball’s 122 swings and misses were a whopping 42.5% of his total whiffs – considerably higher than Kershaw’s (28%) and Cueto’s (30.5%). While Bumgarner’s fastball actually accounts for a higher percentage of the Giant’s generated swings and misses (49%), he possesses a clear secondary option with his cutter, responsible for 29.3% of his total whiffs – unlike deGrom’s change which sat at only 18.1%. Toss in a Top 25 strand rate (77.4%) that is completely intertwined with the strikeouts and the eighth lowest HR/FB ratio (8.1%) in baseball and I’m just not going to pay the price on deGrom. He’s good, but I’ll need a bigger sample size.

Here’s the best way I could describe the difference between sabermetric and traditional stats: the former is predictive of the latter. There’s a reason sabermetric fantasy leagues aren’t a thing – for as much as I love delving into them, their point is to explain why a player accounted for the traditional numbers he put up, which are still the way the we quantify the score and therefore meaning of the game. The other fantastic thing about sabermetrics is that they tend to legitimize each other. A high ground ball rate rationalizes a poor isolated power, a league-leading O-Swing gives credence to a league-high strikeout rate, and a high strikeout rate for a pitcher explains how said pitcher could maintain an outlier strand rate – at least that’s how it should work. This was not the case with Doug Fister’s 2014.  The former Mariner posted a K/9 of just 5.38 last year, his lowest mark since 2010, leading him to not even break the 100 strikeout mark in 164 innings. Yet Fister also posted a league-high 83.1% strand rate – a figure almost 10% higher than his career rate of 73.7%. Again, a strand rate that high is not unsustainable. There’s generally a group of six to eight pitchers each season with LOB% above 80% and in 2014 there were seven. However, among Kershaw, Cueto, Cole Hamels, Chris Sale, Alex Wood, Chris Young, and Fister, only the National and Young registered fewer than 8.7 strikeouts per nine frames. So how were they able to keep such company? Incredibly suppressed BABIP. Young led all of baseball with a laughable .238 BABIP while Fister’s .262 figure was the league’s fifth lowest. So yes, Fister was one of just 22 pitchers to post a sub-three ERA in 2014, but he and Cueto were also the only starters to have a more than full run difference between that ERA and their FIPs – with Fister’s 3.93 mark more than a run and a half higher. For a pitcher who’s value is already entirely found in ratios, I don’t trust Fister to remain that lucky in 2015.

I received a few questions in September about Tanner Roark when he didn’t appear inside my Top 40 starting pitchers and, well, he still hasn’t made the cut. Honestly, there were a lot of red flags surrounding the National even before Washington’s signing of Max Scherzer, which, barring a trade, has essentially knocked Roark from the five-man rotation and into a long man type role. Generally, when trying to assess a pitcher’s value heading into a season, there are a few baseline stats to look at before getting into the true specifics. These are: FIP, LOB%, BABIP, and HR/FB ratio. Sometimes a pitcher will have one or two due for some normalization, maybe another in line to actually improve in the upcoming campaign – Roark’s are all trending in the wrong direction. As addressed above with Fister, ironically Roark’s teammate, it is highly unlikely for a pitcher with underwhelming strikeout numbers to consistently post strand rates outside of the realm of normalcy. The former 25th round pick had a Top 10 LOB% in 2014 at 79.3%. His 6.25 K/9 suggests this will not be repeating itself this year. Roark also registered the MLB’s 19th lowest BABIP (.270) and 14th lowest HR/FB ratio (7.0%). Now, the latter might be a steady trait of Roark’s career, or at least he appears to hope so, with the righty throwing his sinker over 50% of the time. However, if this is the case, Roark’s 41.4% ground ball rate is pretty unimpressive. I’m completely steering clear of Roark this season.