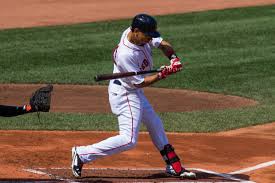 FANTASY BASEBALL – Is Mookie Betts Worth a First Round Pick in 2016?

FantasyBaseballCrackerjacks.com breaks down Red Sox OF Mookie Betts and discusses whether or not he should be first round pick in 2016 drafts.

Amidst another down season for the Red Sox in 2015, it was probably lost on most just how good Mookie Betts finished the season. His second half production ranked amongst the best in all of baseball and as spring approaches, it should not be come as any surprise to see Betts creep into the first round of fantasy drafts.

What Betts brings is a dynamic skill set that offers an exciting blend of power and speed. He is one of the few players in baseball that can be a continual 20HR/20SB threat, so owners that have a pick in the backend of the first round will have to decide whether not 2016 is the year that Betts breaks out.

Betts had a pretty up and down season in 2015, where he had exactly three months of solid production and three months where he was a fantasy liability. In the three months where he struggled, he did not hit have an AVG over .259, nor an OPS more than .718. He did pitch in with at least 2 homers and 12 RBI each those down months, but those still are underwhelming.

While he did have his bumps in the road in only his second MLB season, he did show flashes that should have piqued owner’s interest into contemplating if Betts could be this year’s version of A.J. Pollock. He finished the second half with a, .311 AVG/8 HR/8 SB/.859 OPS/44 R line. Those stats came in 13 fewer games than his first half line, but they nearly matched or barely missed equaling what he was able to do over the majority of the beginning of the season.

Whenever the label of possible “first-rounder” gets attributed to any player, there has to be some sort of statistical basis to believe that he could take the next step in production. For me, the optimism is based around his batted ball data and his ability to adjust and succeed at every level of pro ball that he has reached.

In the minors, Betts climbed through the ranks rather quickly from his age 18 season in 2011, till his eventual debut in 2014. In every stop along the way, he has basically shown the same skill set that we got a glimpse of last season. A plus average, never below a .270 AVG at any stop, solid pop with season highs of 15 and 11 respectively and great speed by stealing 92 minor league career bags.

Success in the minors is not foreign, especially for players ranked as one of the top 100 prospects in baseball, but to see his skill set essentially show at every level makes one think that Betts can keep it going in the future. Add the fact that Betts had a decent sample size in 2014 with 213 ABs, giving pitchers plenty of time to adjust facing him in 2015, and all Betts did was go out and  still produce.

In terms of his batted ball data, Betts has the knack to square balls up and make consistent solid contact. Last season, his Med% (balls in play at medium contact speed) was 52.8%, which paired with his 31.2% Hard%, signifies that Betts certainly has legit gap to gap power. Another positive mark, is that he had…