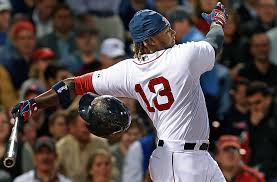 The Royals had already anointed Wade Davis, not Greg Holland, as the team’s closer for the rest of the season, but it was announced Thursday that Holland won’t pitch again this season due to a ligament tear in his right elbow. Holland will be examined next week by Dr. Neal ElAttrache in Los Angeles, but Tommy John surgery seems likely.

Issues actually popped up last September before the team’s run to the World Series, but an MRI last month confirmed the fact that Holland had sustained a tear of the ligament. Holland continued to pitch with mixed results, but Royals manager Ned Yost said the organization finally had to make the decision for him.

“It just got to a point where the kid is such a competitor, he’s going to go until he can’t go anymore,” Yost said.

Holland said his ineffectiveness — the once-dominant closer owned a 3.83 ERA and 1.46 WHIP in 44 2/3 innings this season — and the approaching postseason led him to agree with the team’s decision.

“The coaching staff, they weren’t comfortable, and I wasn’t really either, potentially out there two or three days in a row,” Holland said.

Even with Holland on the sidelines, the Royals boast one of the game’s toughest bullpens. The aforementioned Davis will slide seamlessly into the stopper role, with Kelvin Herrera, Ryan Madson and Luke Hochevar able to pitch in high-leverage spots. Lefties Franklin Morales and Danny Duffy will also be sprinkled in as situations arise.

As for Holland, if he indeed needs Tommy John surgery then he’ll almost certainly be non-tendered by the Royals this winter. Davis, already a must-own in 2015, would become a top closer for next season if he isn’t already.

Hanley (Shoulder) Done For The Season

The shortstop-turned-outfielder struggled at the plate, in the field and with the injury bug this season, and the Red Sox officially shut Ramirez down for the season on Thursday. The latest injury, lingering inflammation in his right shoulder, is what finally did him in.

“Unfortunately, his shoulder was just not responding the way we wanted it to,” said Red Sox interim manager Torey Lovullo on Thursday. “His effort, his focus, his interest in playing first base never, ever waned. It was just a matter of his right shoulder not responding to what he was asking it to do.”