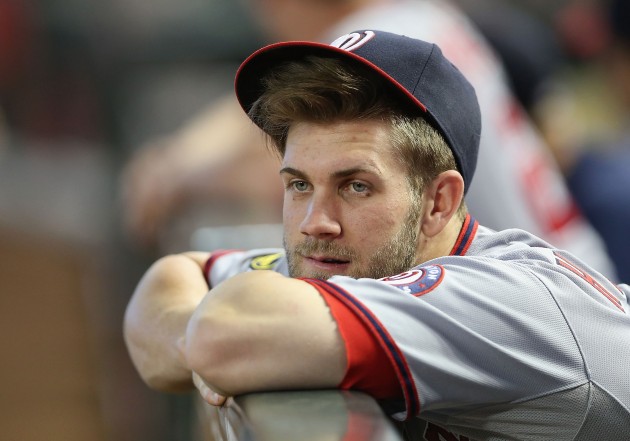 Coming into this season there really wasn’t anyone impartial to Bryce Harper, you were either willing to spend a first round pick or were more than content to see an opponent waste one. But in June, Spring Training impressions don’t matter. In June, you may have come to the horrifying realization that your team is not championship caliber. In June, a player isn’t a name anymore – a player is value, pure and simple, so no matter what you thought of Harper in March, you have to be willing to capitalize on opportunity.

After an already slow start to his season was intensified by a thumb injury and accompanying trip to the disabled list, Harper has begun to take some swings this week, signaling a return in the near future. Quite simply, this means now is the time to buy the still just 22 year-old outfielder. If his price tag was what was scaring you off in the first place, don’t fret. Every Harper owner is a little different, but let’s break down some actual trades that have taken place in the past 48 hours…

There’s two ways to look at this trade. The first is the obvious diminishing value that Harper has accrued since hitting the DL, but don’t sleep on the appeal of the week that Hamilton has just put up. Really, this is a classic case of selling high and buying low. The rookie is finally collecting the decent numbers that owners had hoped would accompany the elite stolen base potential, but don’t be fooled into thinking Hamilton is suddenly anything more than a two category threat. Sure, the return of Joey Votto might help run production, but he still has little to no extra-base power and can’t draw a walk to save his life. I’d make this trade in a heartbeat.

Again… These are real trades. Without getting into the utter certainty I have about Molina’s place among the game’s best behind the plate, this trade would almost make sense without him involved. Yet, he is, and it becomes a steal. Cespedes and Carter both provide power, but unless your league can somehow quantify amazing, internet-breaking cannons, Cespedes has little value outside of home runs and RBI, while Carter is easily waiver wire replaceable.

I’ll be the first person to defend Longoria – in fact, I did so last week, but this trade makes zero sense, even with third base as weak as it currently is. Actually, the case for Longoria is a lot like the case for Harper. The incredibly suppressed ISO will soon be on the rise. The walk rate and pitch selection will improve. The offense surrounding them will get better (Tampa can’t get much worse). Essentially Hosmer’s thrown into this deal out of the pure vitriol that comes with seeing a player taken in the first round flounder. Don’t make trades out of a place of frustration. They don’t often end well.

PEOPLE ARE CAPABLE OF STUPID THINGS! THE LEAST YOU CAN DO IS SEND AN OFFER!

As I mentioned before, the biggest concern for Harper is the lack of power he showed in his first 91 plate appearances this season. At .133, his isolated power is a full 70 points lower than his career average, while his HR/FB ratio of 5% is well below the 18% mark he managed in 2013. However the strangest thing about the beginning of the year for Harper, and possibly the sneakiest reason these seemingly impossible trades have been going through, is that while clearly underachieving all April, Harper still hit to a .377 BABIP. Initially, this would seem to indicate regression, but that might not be the case. While the BABIP, and the .289 average, should lessen, Harper’s overall production shouldn’t be affected. Through 22 games, the National was making contact just 50.9% of the time he swung at pitches outside the strike zone – an over 10% decrease from last season. Even with contact in these situations liking equating to weak ground balls, the alternative is strikeouts, which Harper had been doing at a far greater rate this season. Replacing a few whiffs with 6-3 putouts may not seem like much, but it’s could mean stabilization in average even after the career-high BABIP falls. Generally speaking, contact is never a bad thing – neither is owning Harper. His value has never been lower and opposing managers have never been more eager to sell. That’s a scary combination.

With only three major league starts so far in 2014, it would be fair to speculate that the Orioles are easing Kevin Gausman into a full time MLB role, though one look at the opponents he’s faced would beg to differ. After making a spot start against the reigning American League Central Champion Detroit Tigers, Gausman has recently matched up with Oakland and Toronto – the top two offenses in the AL. However the former first round pick allowed just two earned runs in the latter two outings, scattering nine hits over 13 innings. He’s looked good. Even with the strikeouts being almost a non-factor to this point. Gausman has tallied only 5.82 strikeouts per nine. To put that in perspective, the hulking right-hander set down 77 opposing hitters in his 78.1 frames in AAA Norfolk. The sample size is small, and when talking Gausman, who’s never spent more than 47.2 innings consecutively at one level, they all are, but the reason behind this occurrence is an 8% drop in the Oriole’s O-Swing% and a near 6% uptick in the opponents’ zone contact rate. Still, with a fastball that sits on average at 95.1 mph, which would be good for sixth highest in baseball among starters, expect the whiffs to begin to pile up. Unlike most power arms, Gausman isn’t a risk for your WHIP with a solid walk rate throughout the minors, if he can regain his strikeout touch – watch out.

Taken five picks after the aforementioned Gausman in the 2012 Draft, Andrew Heaney will make his long awaited MLB debut Thursday night in Miami and I’d suggest picking him up. Quickly. Since staff ace Jose Fernandez went down in late April, it’s really just been a waiting game for fantasy owners as to when Heaney, who had been dominating AAA, would get the call. In his 76.2 innings in the minors this season, Heaney began the year in AA, the rookie has managed over a strikeout per frame and has seen that number jump to an impressive 10.57 with New Orleans. The more stunning figure? Heaney has walked just two batters over those 23 innings giving him a ridiculous 13.5 K/BB ratio. Obviously it’s difficult to gauge how these numbers will transition, but I would be comfortable banking on Heaney’s ability to keep the ball in the yard carrying over – especially playing in Marlins Park. In his 193 professional innings, Heaney has only surrendered seven home runs. Seven. Granted, his stay in the Pacific Coast League wasn’t too long, but enticing none the less. As FNTSY’s Pat Mayo points out, the long term move might be to sell high on the top prospect, but I’d suggest waiting till after he pitches against the Mets, who rank 29th in baseball with a .218 team average the past two weeks. If he can put together a solid outing, his value will be even larger than it is now – high praise for someone whose ownership jumped more than 20% in the last 24 hours.

As a Top 50 starting pitcher coming into the season, I would’t blame you for taking a look at Marco Estrada this week after his ownership numbers plummeted under 50%. Normalization is coming for the Brewer, but that’s something not normally found in Colorado. That is to say, Estrada might rather play in the laundry room than at Coors this Friday. The 23 home runs he’s allowed in 2014 are already a career-high. His 5.92 FIP is the highest in the league by over three tenths of a run and that’s even with the sixth lowest BABIP in all of baseball. It’s been rough. Now, Estrada won’t continue to give up long balls at this rate, his HR/FB ratio of 18.7% is well above both the league and his career average, but even with regression his numbers aren’t in line to get significantly better. Estrada has the lowest ground ball rate is the National League at just 33.9% – meaning both his fly ball and line drive rates are inflated accordingly. Yes, you’re more likely to get a base hit on the ground, but extra base hits are accumulated in the air, which is more than evident when you take a look at the opponent ISOs on Estrada’s individual pitches with all three offerings – his fourseam, change, and slider – surrendering rates above .244. Is Estrada a player to watch? Sure. But there might not be a worse match-up this week in baseball.