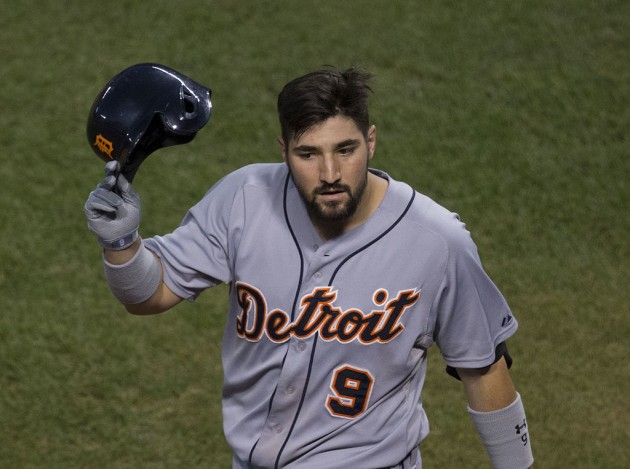 Razzball.com breaks down Tigers 3B Nick Castellanos and debates whether or not he’s a sleeper to target in your 2016 fantasy baseball drafts.

I went looking around The Google Machine for Nick Castellanos articles and they go like this starting in 2013 to present (I’m paraphrasing):  “Is High-Flying Prospect, Castellanos, The Next George Brett?”  “Can Castellanos Be Better Than Miggy?”  “Castellanos Hopes To Bounce Back After His Lackluster Rookie Season?”  “One Bad Year Behind Him, But He’s Still Young.”  “Castellanos Puts Second Poor Year To Bed, Will His Bat Ever Awaken?”  “Castellanos Is A Platoon Player, Face It.”  “Castellanos Shows Bat Is Ready For Prime Time….Prime Time In India Where CSI: Mumbai Is A Ratings Disaster.”  “Castellanos Is Greek For Can’t Stand Yous.”  “Castellanos Finally Shows Glimmer, Is It Too Late?”  “Castellanos Surprisingly Not Related To Nia Vardalos, Still Ugly If You Look At Him Too Long.”  There ya go, that pretty much tracks the career of Castellanos up until now through article titles.  In Triple-A in 2012, Castellanos had all the makings of a hot prospect at the age of 21.  Now, he’s 23 and it feels like that’s in dog years.  So, where’s the optimism, is it that I can’t let a top prospect go?  No, and I take offense to that.  I let Jay Bruce go…after six seasons.  Anyway, what can we expect from Nick Castellanos for 2016 fantasy baseball and what makes him a sleeper?

Castellanos’s 2nd half was solid.  It wasn’t great, but it was promising.  Finally.  Now, I could cherrypick the junk out of his 2nd half to get him into the top ten in some offensive categories, but besides “Top Ten Hard Contact Percentage in the 2nd Half for Players Under the Age of 24” it’s not an easy cherrypicking assignment.  In the 2nd half, he had 9 HRs in 245 ABs.  If you were just to do a sloppy prorating job, that makes him a 20 HR hitter for next year.  In another insane case of Grey’s psychic, here’s what I said on July 24th of this year, “What do numbers call their father?  Data.  Thank you, Highlights.  You taught me so much with the juxtaposition of Goofus and Gallant, and you’ve entertained me for thirty years.  One copy, that is well worn, sits on the back of my toilet as my salvation, especially when Cougs forgets to restock the toilet paper.  Why am I thinking about data right now?  Because I just spent two hours (more like ten minutes) looking for something.  I was trying to find what a hitter does after hitting the longest home run of their career, then sorting by guys that do it before their 24th birthday.  Alas, I couldn’t find anything.  Elias Sports Bureau probably knows but they’re a bunch of baseball nerds.  We’re fantasy nerds.  Huge difference, we have imaginary friends cooler than their real friends!  My hypothesis I was aiming for is if a guy, who was once a well-regarded prospect is called up at a very young age, it might take a bit of time for them to acclimate themselves.  Then, once they were comfortable, they’d show power, hit the longest home run of their career and take off from there.  At this point, it’s just conjecture, but it makes reasonable sense in…