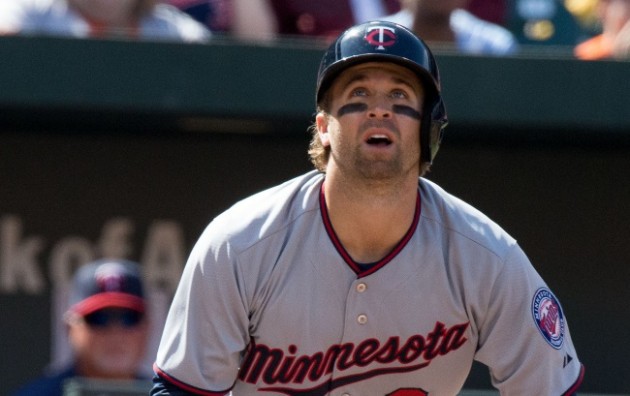 Brian Dozier; Or How to Go from Sleeper to Bust in 365 Days

The terms Sleeper and Bust are so overused in Fantasy, but then again that’s what everybody’s looking for. Those terms are also largely a product of perception and the value that inevitably accompanies that perception. After a strong second half in 2013, Brian Dozier entered 2014 as a pretty trendy sleeper because of his power/speed combo. He didn’t disappoint either with 23 HRs, 21 SBs, and 112 runs scored. His .242 average didn’t feel so nice, but you accept it when it comes wrapped in those other numbers.

Dozier now enters 2015 as a consensus Top 5 second baseman; a proven commodity. Buts just how proven is he?  It’s nice when you can snag a player like Dozier at a cheap price and enjoy. Are you ready to pay the going rate now that he’s no longer a secret?

I’m not, and if the title of this article didn’t tip you off, I think there’s a very real chance Dozier is a huge disappointment this year.

Because, I’m such a damned optimist and just not real good at this reverse-sales stuff, I’m gonna start off by telling you good things about Dozier, and there are plenty. The people in Minnesota have come to love him for his hustle and all around scrappiness. But scrappy never worked on Scooby-Doo and it doesn’t mean anything in Fantasy. But there’s more to Dozier than just intangibles. He’s really developed a better approach in some ways. Over the last two years his BB% has tripled and if you play in an OBP league, he’s no longer a detriment. That increased OBP has meant more runs scored and of course more chances to run. So, we’ve got this seemingly proven power and speed, to go along with those runs scored. We know about the average. Why the sad face for Dozier? While I don’t expect a total crash here are three reasons I’m a little glum on Mr. Scrappy.

1. That batting average – Yeah, I know we discussed that, but I think people are letting the new shine on Dozier blind them a little. I keep hearing how a low average doesn’t hurt as much since the Major League BA is now down to .251. Remember though, we’re playing Fantasy.  We need to see Dozier’s .240 average in context to the player universe used in our leagues. I just checked a 15-team mixed league I played in last year, and the composite batting average was just under .265. I don’t have data from 10 and 12-team leagues, but that number is undoubtedly even higher. Batting averages are going down, but make no mistake about it, Dozier will be a negative value in that category.

2. That second half – The final numbers look great, but did you notice what happened after the All-Star break? Yeah, just five HRs and five SBs. I realize second half stats aren’t exactly the bible for projecting future production, but it still concerns me. His HR/FB dropped sharply and he had just seven stolen base attempts compared to 21 before the break. While, plenty of players have rebounded from a bad half of baseball, Dozier’s Fantasy value is pretty tenuous. A drop in either speed or power and he starts looking a lot more like Asdrubal Cabrera.

3. That Depth at Second Base – Ok, so here we have a player with obvious negative value in one category, a bad three and a half months in two others, and someone without a lot of track record to fall back on. His positive attributes still look pretty nice until I consider his cost and then look at the player pool eligible for second base. As I look through my Second Base Rankings, I can find some pretty solid bats, even as I get to the No. 20 slot. Think it’s impossible for Aaron Hill to put up 20 HRs and 10 SBs or so? He did it just two seasons ago. How about Rougned Odor at age 21? He hit nine HRs in just 386 ABs last season and he’s turning 21 in a few weeks. Oh, did I mention he’s had 32 minor league stolen bases in 2013? The point is not that I like these guys better than Dozier. It’s all about cost and risk.

Maybe I’m barking up the wrong tree with Dozier. I do like that he’s improved his approach and will now take a walk. I don’t see him falling completely flat and losing him job. There’s chance he puts up numbers comparable to 2014. A chance… I don’t like to take chances. Whoever said you need to take risks to win in Fantasy baseball probably never won. You take your risks in the later rounds and that means there is really very little risk.

Brian Dozier is a risk. Combine that risk with a rapidly rising draft cost and you have a Fantasy bust in the making.