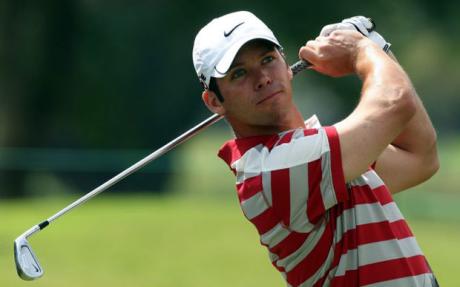 DraftKings is offering $1,000,000 to the winner of their US Open event. Give yourself a shot at becoming a millionaire by signing up NOWWW and getting receiving a generous BONUS!!!!

Accuracy is king at the Crowne Plaza, yet the driving accuracy stat doesn’t tell the entire story. No, since Colonial measures a paltry 7,204 yards, a lot of the longer hitters can club down, generate more hit fairways and still be in short wedge range. This complicates matters. Take 2014 champion Adam Scott. He finished a very average 80th in driving accuracy for the year; at the Crowne Plaza, the then No. 1 in the world finished the week T8 in accuracy, which was reflected in his distance totals. Scott understood bombing his way to victory wasn’t going to happen, and hit it 290 yards off the tee instead of his regular 300-plus. If you want to lean towards a generally inaccurate bomber this week, make sure they excel in apex height (to sky their way out of the trees if need be) and ball striking.

Now, overall driving accuracy is still one of the most important predictors at the Crowne Plaza, but a lack of isn’t necessarily a reason to cross players off your roster if they meet the other criteria.

The Crowne Plaza has been played at Colonial since 1946 making it the longest-running event on Tour to be played at the same course. These are always my favorite courses to research, since historic data tends to be more predictive. No player has made the Crowne Plaza their first career win since Sergio Garcia in 2001. He was also the last winner to take home the stupid plaid jacket in his first start at Colonial too. It’s not to say that a first-timer can’t end up in an embarrassing photo, waiting for the trophy, surrounded by a series of sartorially challenged well wishers, but with so much danger lurking just off the fairways, knowing where to miss on certain holes can be a distinct advantage. If you can’t be talked out of rolling a course rookie through your lineup, you’re better served leaning more on accuracy off the tee than anything else. You may want to take a gander at the leaderboards from the Valspar and Heritage as well, two courses that reward similar skill sets.

For the course, scrambling will be essential for all those that miss a lot of fairways, but the scorecard reveals specific insight to the types of shots players must make to excel in Forth Worth. Playing as a Par 70, Colonial is one of the few tracks where simply scoring on the Par 5s guarantees a big paycheck. Making birdie on both is critical to posting low numbers, but they’re the two easiest holes on the course and cede very few eagles (only 12 between them in 2014) so they don’t lend an advantage to any one type of player. However, three of the four Par 3s measure between 190-200 yards and seven of the 12 Par 4s play between 400-450 yards. Some will say Par 4 scoring is essential, and they’re right, but narrowing the focus to efficiency from this range better identifies which players will pile up birdies in droves.

Ryan Palmer & Jason Dufner – The home-course bump worked out well for Webb Simpson at Quail Hollow, and I’m wagering it produces a lofty finish again this week for Colonial CC member, Ryan Palmer. (And to a lesser extent, Rory Sabbatini) Of course, just being familiar with a layout is no guarantee of success by itself; there needs to be other predictive factors that nudge you in the right direction. Fortunately, Palmer has that on his side. The Texan has gained the 11th most strokes tee-to-green in 2015, which has produced an elevated GIR rate (36th) and birdie or better percentage overall (15th). When you account for his overall success this season (8/10 cuts, seven T25s) and his recent course history (T5, T14, T15), you have a… wait for it… MUST START!!!! Palmer also cleaned up from the key approach range of 125 yards in the last year, making birdie or better 33-percent of the time. While that number was good for 12th in the field, Jason Dufner led all players with his short iron conversion, with a 47-percent birdie or better rate. Now, 2015 clearly isn’t DUFF MAN at his peak; in 12 events this season, the 2013 PGA Champion has only notched a lone T10. That’s OK, though. Dufner limped into this event last year and ended up in a playoff. His skill set just suits the layout. He remains extremely accurate off the tee (28th), and that’s regardless of the size of fairways. In fact, the smaller the landing surface, the more it plays to Dufner’s strengths – 12th in distance from the edge of fairway. And it’s not like his wedge game has deteriorated with his results. For the year, Dufner sits eighth in proximity from 100-125 yards from the fairway, and sixth from 50-125 yards. Normally, lousy bunker play (146th) and putting (165th) derail his round, however, that’s less problematic at the Crowne Plaza. Dufner’s proximity will help mitigate the damage caused by his putter, and despite the 84 bunkers around Colonial, it has the easiest green side sand traps to escape on Tour. It’s a tailor-made track for Dufner, and the results have followed: second, T46, and second the last three years. As a bonus, if he wins, maybe Skinny Dufner can convince his smoking hot wife to get back together with him. Never overlook incentive!

Paul Casey & Jimmy Walker – Hopefully, Fantasy players will focus too hard on Paul Casey’s illness induced flameout at THE PLAYERS and keep him off their rosters. It would just allow those of us that use him to gain even more points on the field. Even after his day one 79, then WD at Sawgrass, Casey remains on the brink of a breakthrough. He’s reeled off T10s in five of eight starts, and is entering a soft spot in the schedule for his strengths. The Brit is tops on Tour from the key Par 3 distance (175-200 yards) and is the eighth-most efficient in the field on 400-450 Par 4s. Like I’ve said about Casey all season, you have to go back to his pre-injury results to get a grasp on his real history at courses. Yes, he failed to play the weekend last year, but he was skill honing his game, in his two previous outings in Forth Worth (2009/10) he finished 5th and T13. Jimmy Walker’s form has been WAYYYYYY off since winning the Valero in late March (T38, T52, MC), but it’s hard to pass on an elite player in a field sporting a dearth of high end talent. If you want to go contrarian, Walker would be my first cut for the likes of Ian Poulter, Chris Kirk, Daniel Berger or Marc Leishman, but my confidence persists in his game to give him the start. He’s still the Tour’s top putter, and rakes from 50-125 yards on approaches (25th), presumably why he’s the best in the field in Par 4 scoring from 400-450 yards.

Jordan Spieth & Zach Johnson – Yes, a pitiful T73, as the favorite, from Zach Johnson at the Crowne Plaza in 2014 left a sour taste in everyone’s mouth, but one bad year shouldn’t dissuade you from loading up on the two-time champ, especially with his game rounding to peak form. ZJ had an inconsistent stretch from January to March that has skewed his season long stats. Narrative wise, it’s easy pointing to his albatross in the final round at Bay Hill as the  moment his season turned around. Yes, in reality it’s an arbitrary point of reference, but since finding his iron accuracy over the weekend at Arnie’s event, Johnson has been on point. He’s posted T20s in five of his last six starts, despite a crippling addiction to bad putting (159th). And the flat stick shouldn’t be an issue at Colonial; ZJ seems to have these greens figured out. He finished inside the T20 at this event in SG: Putting each year from 2010 to 2013. His results over that period: Win, 4th, Win, 3rd. With his game returning to form, expect his totals this week to resemble the glory stretch over last year’s debacle. You don’t need to be convinced to take Jordan Spieth. He’s the best player in a weak field. Sounds ripe for his eighth T10 in 14 starts.

Robert Streb & Brendon Todd –  With its bounty of quality, the Yahoo! C-List has been the best place to diversify your roster all season. If you want to play it safe, I recommend the always useable duo of Patrick Reed and Kevin Na. However, I’m going to mix it up in a attempt to vault up the standings. We’re officially into post-hype Robert Streb territory. Streb was Fantasy golf gold to start the season with five T10s (including a win) in his first eight starts. Thennnnnnnnnnnnn… it flipped. In eight events from February through April, the world’s No. 73 ranked player was abysmal: No finish better than T44 and five missed cuts. THE MILK’S GONE BAD!!!!! Lately, though, he’s started to put the pieces back together with a T30 at THE PLAYERS and a T4 last week. With his form beginning to trend in back up the leaderboard, he can put his skills on Par 4s 400-450 yards (seventh in field), putting inside 10’ (25th) and GIR (26th) back to good use. When a course rewards accuracy and putting, never bother looking further than Brandon Todd. The Todd rates 14th overall in driving accuracy, 22nd in SG: Putting and, shockingly, has gained the 29th most strokes tee-to-green despite sitting a meager 185th in driving distance. If you want to make a checklist of everything Todd does well at Colonial, you’re going to run out of ink: 18th from 50-125 yards, fifth in scrambling, fourth on putts inside 10’, 24th in overall proximity and fourth in the field on Par 4 efficiency from 400-450 yards. He’ll make a great one-and-one pick if you haven’t burned him yet, as he’s likely to replicate, or build upon, his T5 showing in 2014.